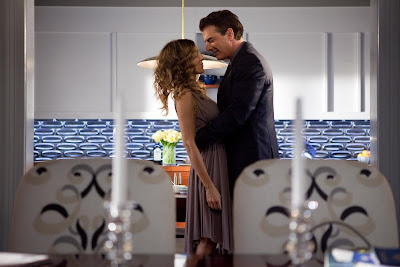 Yes they're back.... and coming soon to a theater near you. Carrie, Miranda, Samantha and Charlotte return to the screen in Sex and the City 2 (Warner Brothers) this Memorial Day weekend and the film promises fashion, style, travel, love, drama and even a gay marriage with Liza Minelli as the entertainment thrown in for good measure. And great sets.

I had the opportunity to once again interview Lydia Marks who also reprised her role as set decorator (she worked on SATC1 and gave us Miranda Priestly's fabulous power office in The Devil Wears Prada). Lydia, who is also an interior designer and principal of Marks & Frantz in NYC, (her real life work can be seen at the Standard Hotel's roof top bar)  had the opportunity to redesign Carrie and Mr. Big's apartment along with a pretty fabulous wedding party. (Jeremy Conway served as production designer of both the film and television series and came up with the initial concepts).

Cinema Style: What was the design direction for Carrie and Mr. Big's apartment?

Lydia: It was decorated as if Carrie (and her decorator) chose the pieces, but with Big very much in mind!  It was designed to be a place he would be comfortable.  It has a lot of strong lines in it, and furniture with hard edges.  In the layering of the furniture and the personal objects, books, textiles, and collections, I tried to add a little Carrie into it. For example, the carpets were patterns that I chose to reflect her nature and creativity. 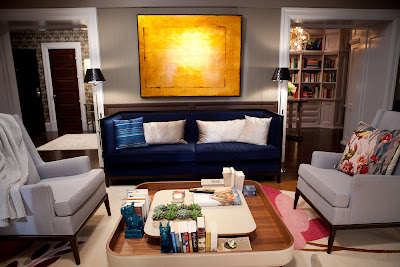 Lydia: The kitchen was the one room in the house that was totally given over to Big in terms of design, it's his room. For example, the simple, elegant, mid-century rosewood table and chairs are something he would have chosen. Knowing that this room would be seen in many different shots of the apartment, we wanted a light fixture that would work with that period of furniture and complement the room. 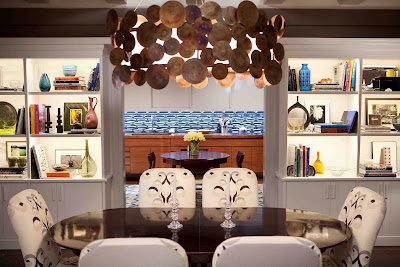 For the living/dining room we made our own cashmere covered wainscoting in a pinstriped deep shade of chocolate to create a rich, luxurious feeling space. 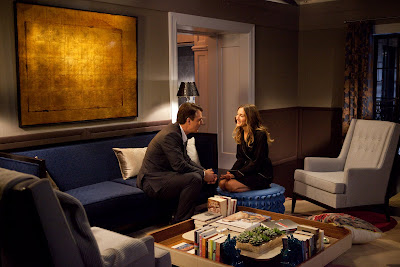 Robsjohn Gibbings Club Chairs from Bergdorf Goodman
Coffee Table - Potrona Frau
Montauk Sofa with Donghia fabric in Basket Case Blue
Throw pillows from Calypso Home
Area rug from  The Rug Company
Cinema Style: How did the story line play into your decisions?
Lydia: One of the design trends now is overscale furniture. This drove us to search out more vintage pieces, lending a challenge to find the right furniture for Big and Carrie’s NYC apartment - and a set that needs to leave room for actors to move. In the beginning, when the designer and I were discussing Carrie's apartment and what style might appeal to her character, we considered French Deco from the 1930’s because the scale was appealing. We ultimately moved away from that specifically, but tried to retain the scale and the character of that period. 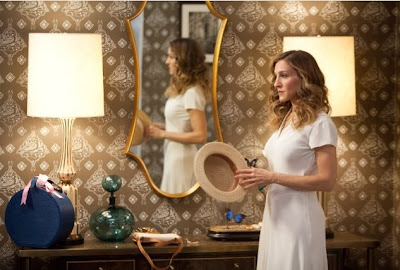 Lydia: The design direction in the foyer was to create a console table that supported an important script note. The director wanted Carrie to make a dramatic entrance that brought her deeper into the apartment. So rather than fulfilling the mundane role of a place to drop your keys and mail, the foyer became an important backdrop for them every time they walk in the apartment. The console table, a great Mastercraft piece, is filled with an eclectic assortment of vintage pieces from different time periods and different 1st Dibs vendors: a beautiful handblown glass bell jar filled with butterflies from the 1800s, fanciful striped lamps and a mirror that is reminiscent of hollywood glamour.

Cinema Style: And no Carrie Bradshaw interior would be complete without the ultimate closet. Besides finding the perfect man, her dream was to have the perfect closet. Looks like she gets her wish! 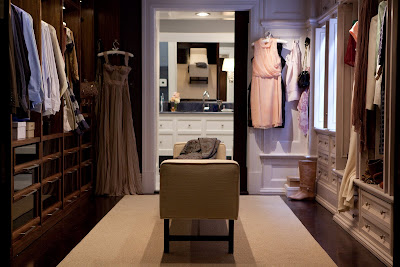 For more, see my pieces on "Sets and the City" on the Architectural Digest website and on the
Huffington Post (which should be up today or tomorrow -- check the Style section).