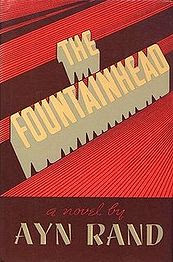 "There is no room for originality in architecture."
--Howard Roarke
It is rare a best selling novel translates successfully onto the silver screen. (Gone with the Wind, yes. Bonfire of the Vanities, no). And often it's a toss-up. 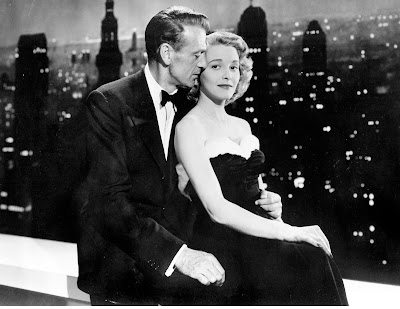 Such was the case of novelist Ayn Rand's critically reviewed yet immensely successful book The Fountainhead (1943), the story of maverick architect Howard Roarke who some say is loosely based on Frank Lloyd Wright. Roarke battles the staid architectural establishment against mediocrity, refusing to compromise his ideals and most particularly, his designs. As the lone proponent of modernism, Roarke's style was said to be modeled after Wright's work of the thirties and forties (take a look at his renowned work on Fallingwater)  and the International Style. It was a time where European modernism met forties corporate American modernism. 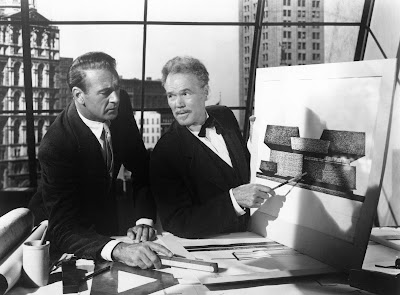 Six years later, Warner Brothers turned The Fountainhead (1949) into a film, casting leading man Gary Cooper as Roarke and Patricia Neal as love interest/architecture critic Dominique Fanchon. Much like the book, the film is a cult classic yet met outcry with both movie critics and the architectural community alike. (Perhaps architects hated the devoid-of-soul portrayal of their profession). The film has camp, melodrama, romance, manipulation and yes, great sets.
Naturally architecture plays a dominant role and the sets needed to be of major importance. As film lore goes, Warners approached Wright to design the film but quickly balked at his
$250.000 fee, hiring a young set decorator Edward Carerre instead. It was his first solo effort on a film. 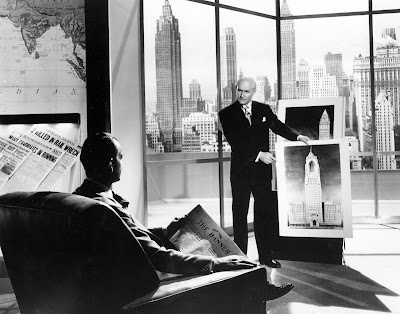 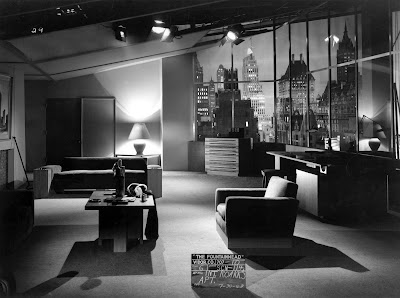 Carerre's design is characterized by themes of shapes - hexagonal grids, rectangular rug with woven pattern of squares in an orthogonal room with a sofa placed on the diagonal. 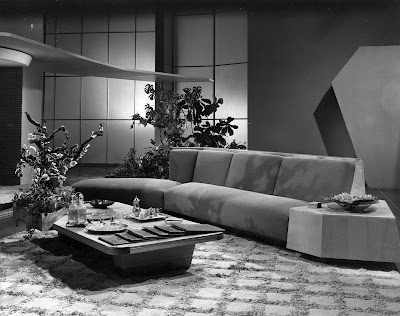 Film historians note the sets represent the "last gasp of modernism of the times." Ironically, the very elements the architectural press disputed (such as the contemporary designs of the Enright House) became popular years later in Manhattan. 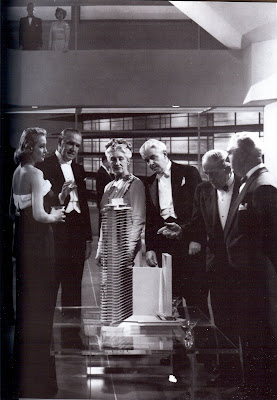 Wright's famous Fallingwater house became the inspiration (or copy if you will) for the house of the Hearst-like character Gail Wynand. 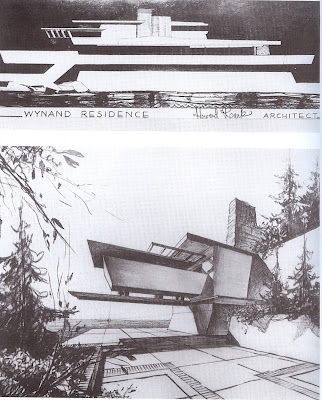 Symbolism abounds in the film -- from the phallic shapes of the skyscrapers to Cooper's jackhammering and chiseling ... well you get the picture. The sexual chemistry made the film that much campier. Legend has it Barbara Stanwyck wanted the role, Ayn Rand wanted Greta Garbo and Humphrey Bogart was considered for Roarke. Imagine what a different film it would have been. 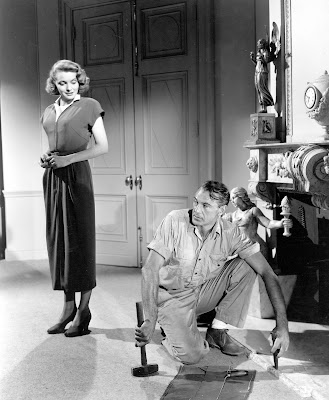 A sultry Patricia Neal graces the cover for my story on classic movie inspiration for Array Magazine (Winter 2004/5). Amazingly she was only 22 years old when the film was made and a relative unknown. Cooper was 47. 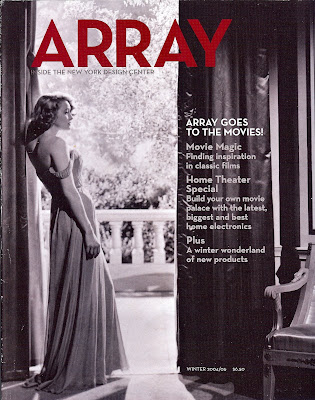 Rumor has it Atlas Shrugged may be turned into a movie for release in 2011. Imagine adapting that book to the screen!
Photo credits: Courtesy of Warner Brothers, Array Magazine
Posted by Cathy Whitlock at 10:00 AM No comments: