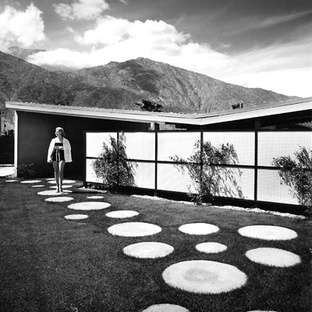 If you happen to find yourself in Palm Springs this weekend, please attend the Hollywood Designs on TV and Film panel!  Presented by the Set Decorators Society of America and WestEdge Design Fair, I will be hosting a panel with Academy Award-nominated production designer Jeannine Oppewall (LA Confidential, Pleasantville and Catch Me If You Can) and Emmy-nominated set decorator Ellen Brill (American Horror Story series, Aquarius and Nip Tuck) on the influence of design on film and television. The event will be held in the Elle Decor Lounge at Modernism week,  Sunday,  February 14th from 1-3 pm followed by a champagne reception and Designs on Film book signing. Hope to see you there! 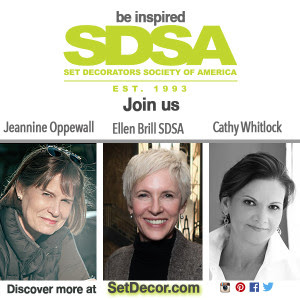 It was a time of martinis, cigarettes and the advent of the Pill and min-skirts, ....and of course sex.  Showtime's period drama Masters of Sex centers around the real-life pioneers of the sexual revolution William Masters (Michael Sheen) and Virginia Johnson (Lizzy Caplan) and their ground-breaking studies. Set in St. Louis in 1958, the hit series captures the styles of the period with perfection with many of the costumes and sets rivaling another favorite, Mad Men.

Costume designer Ane Crabtree created the original costumes,  using sixties icons Jackie Kennedy, Grace Kelly and Audrey Hepburn along with research from Life Magazine for inspiration. The costumes are indicative of middle-class society and suburban looks of the time. Think capri pants, bateau neck lines, slim-lined cocktail dresses and bow ties for the men. It's incredible how many of the styles still hold up today.

In the Garden with Scandal's Darby Stanchfield 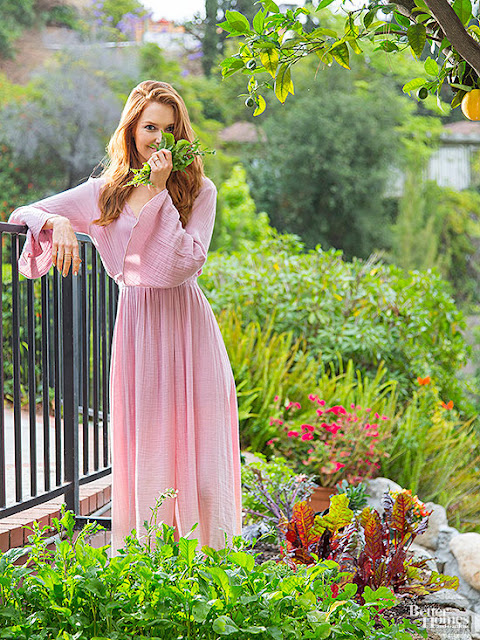 While weekdays find her working with her fellow “Gladiators in suits” on the studio lot, Scandal's Darby Stanchfield (who plays sassy White House Press Secretary Abby/Gabby and if you are a true fan you will get the last reference) spends her weekends in the garden.

I caught up with the Alaska native this past June for a piece in the September issue of Better Homes and Gardens. Not only is she stunning, accomplished and utterly delightful, she is quite the natural gardener and cook.

Darby  grew up fishing for king crab and red salmon along with mushroom hunting and berry picking and today stays true to her culinary roots. “Eating the indigenous foods of that climate were something that influenced me at an early age,” she says.   She learned sustainability, composting and cooking meals from the garden at the feet of her grandparents who were way ahead of their time. Her garden is filled with tomatoes, arugula, blue dwarf and purple kale and a large variety of herbs. “I don’t really grow flowers as I am a little bit pragmatic. I like to grow stuff I can eat.” She cooks asparagus bisque, lentil stew, and roasts on the weekends and often makes a big salad for the cast on their Sunday potluck Scandal viewing parties, often held at actor Jeff Perry's house. Her Meatless Mondays are a staple and you can find recipes on Darby’s social media.

Here are a few behind the scenes shots. Enjoy! 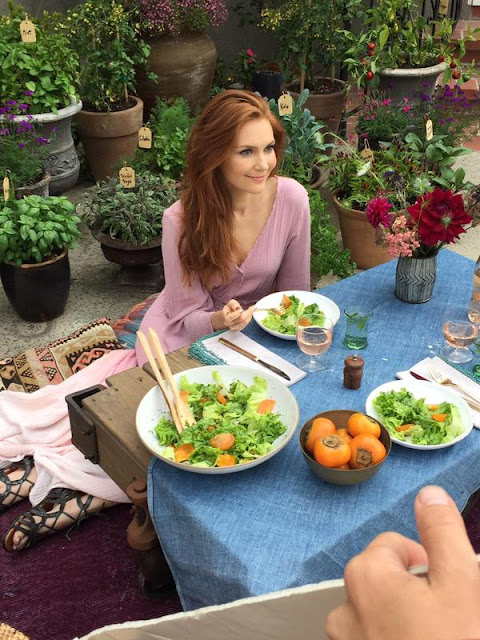 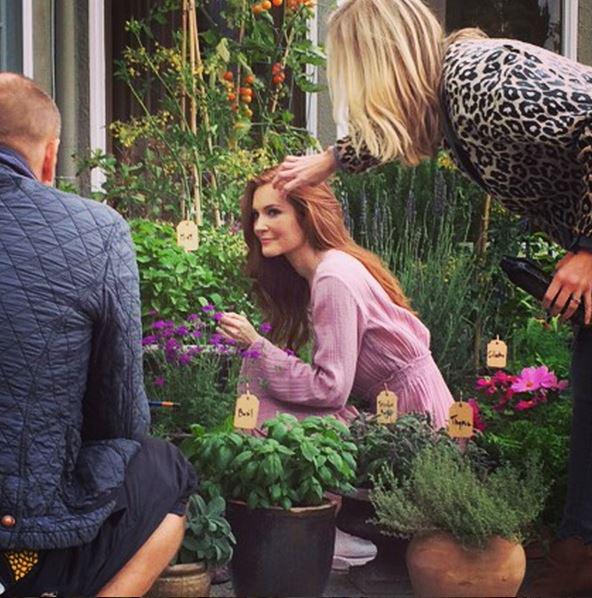 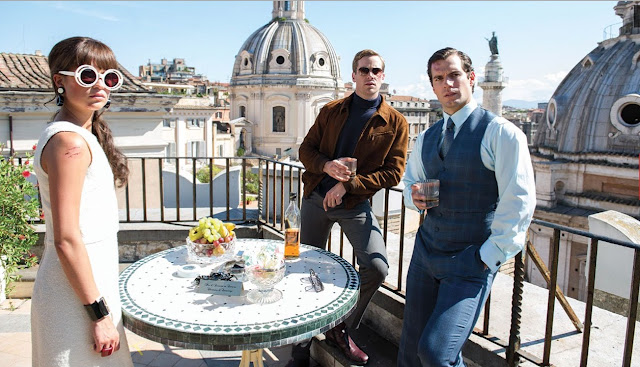 For those of us of a certain age, our childhood years were spent watching secret agents Illya Kuryakin (KGB) and Napoleon Solo (CIA) fight intrigue and international espionage on the small screen. It was the 60s, a time of James Bond, fantasy gadgets, glamorous locales, mini dresses and in this case, the first season of The Man From UNCLE was in black-and-white (now that I don't remember).

As with all good ideas, a remake is always in the mix. This time around, The Man From UNCLE makes its big screen debut courtesy of director Guy Ritchie and Warner Brothers. The dynamic duo (oh wait, that's another 60s genre, Batman and Robin) is back (Henry Cavill and Armie Hammer) fighting WWII fascists who are in possession of a nuclear device. The time is 1963 and there are great gadgets, international locales (Germany and Italy) and sophisticated 60s styles influenced by retro looks from Marisa Berenson, Veruschka and Jean Shrimpton. Look for lots of bright colors, black-and-white, color blocking and A-line shapes courtesy of British costume designer Joanna Johnston (and lots of Roger Vivier shoes). All I pretty much want in a movie these days.....


TV's Get Smart and James Bond films were a major influence for the set designs by production designer Oliver Scholl. Some of the standout sets (totaling 90 in all) include a sleek Neo-Italian fascist-styled company headquarters and a classical 60s style hotel.

To read about the production design and set decor of The Man From UNCLE, check out my article in The Hollywood Reporter. 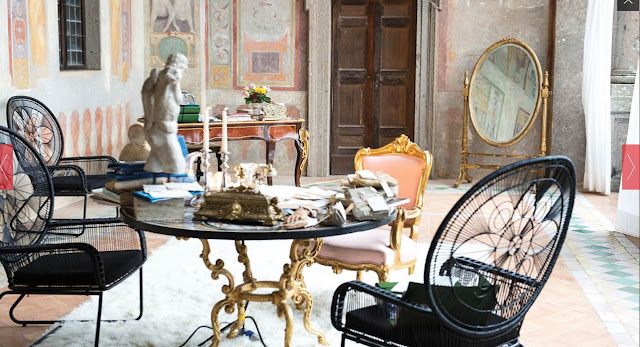 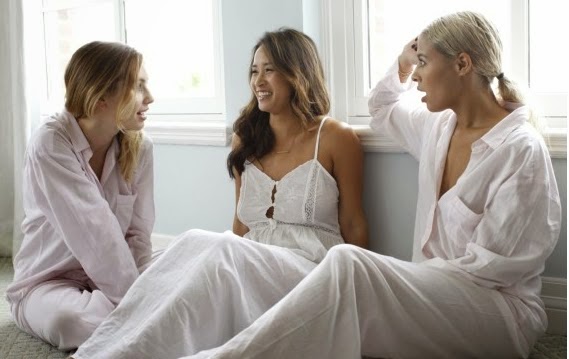 The socially conscious line was recently launched at one of my favorite stores Calypso St. Barth's in Brentwood, California with full proceeds going to aid female victims of violence in the Congo. It doesn't get any better than that. 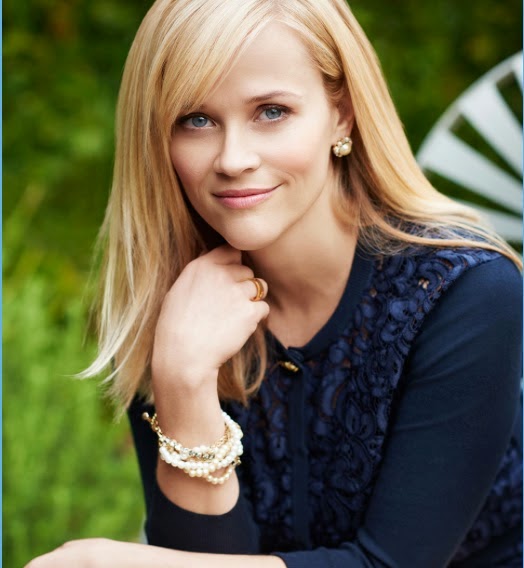 There is no denying actress Reese Witherspoon has style, great taste, charm and she is Southern.

Joining the fray of celebrity lifestyle brands (think Gwyneth Paltrow's Goop and Blake Lively's Preserve), the Oscar winning actress launched the site  that features curated items in home, fashion and jewelry on May 6th. Named after her grandparents Dorothea Draper and William James Witherspoon, the site sold out of items such as a $325 Derby handbag and the Solid Edgehill dress at $225 almost immediately. Clearly she has a hit on her hands.

Reese notes that "Women in the South love to dress up. They love color and prints and generally love to look put together. Depending on the occasion, several days of thought can go into one outfit!" As a Southerner by birth, I concur.

Rumor has it Reese may open a store in her hometown of Nashville so stay tuned. And perfect timing for the website launch as her film Hot Pursuit with Sofia Vergara opens in theaters
Friday, May 8th. 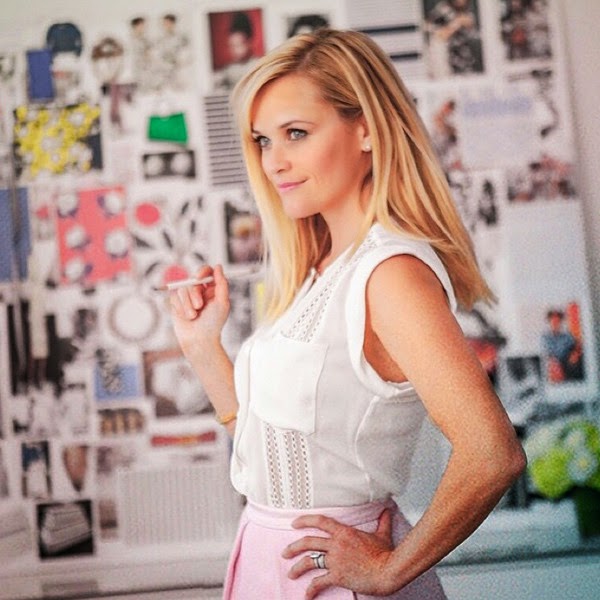 The Gone With The Wind Auction 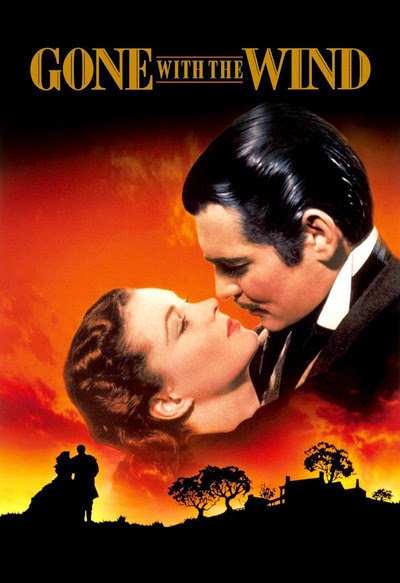 Bid soon or it truly will be gone with the wind.

Fans of the beloved 1939 film have the chance to collect their own piece of history as collector James Tumblin offers his incredible collection of Gone With the Wind memorabilia through Heritage Auctions in Beverly Hills Sunday, April 18th and Monday, April 19th. While it makes me sad to think of these iconic items sold individually (I would love for a museum to purchase the whole lot in its entirety), here is hoping they will be preserved for generations to come.

Here are a few of the show-stopping items:

Fans will recall Scarlett wore this dress when she gets attacked in Shanty Town, the Rhett Butler "What a woman!" scene and when she directs workers on where to place the Wilkes & at their new place of business. The two piece ensemble is estimated at $100,000-150,000. 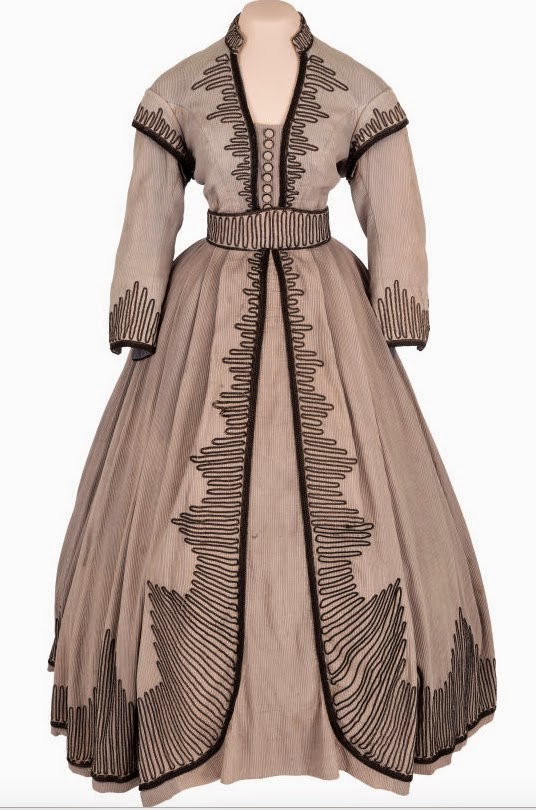 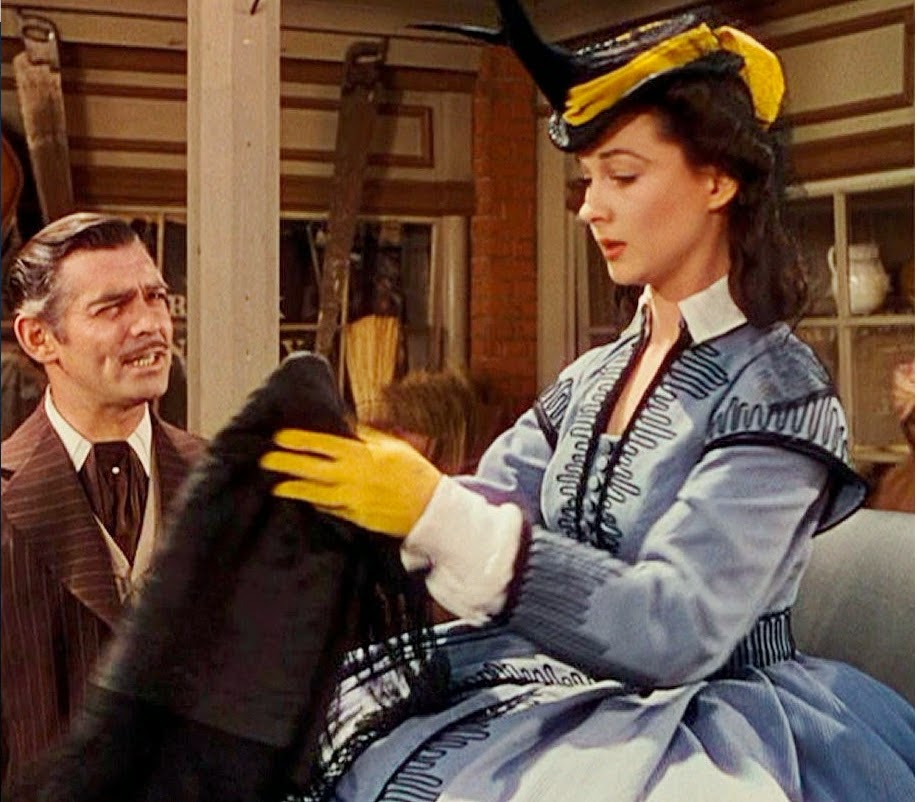 Scarlett peered from the wide brim straw hat with green velvet chin ribbon at the barbeque at Twelve Oaks and the first time she set eyes on Rhett Butler. Estimate $10,000-15,000. 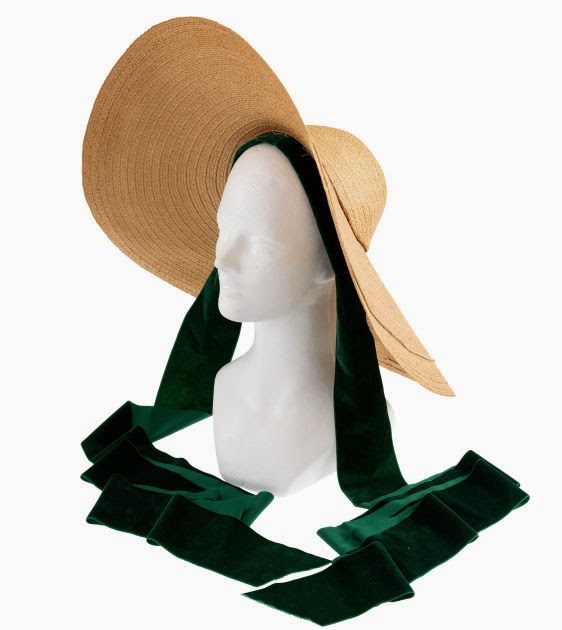 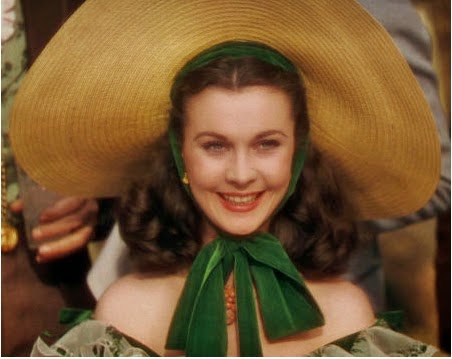 This looks to have a floral Aubusson fabric and was seen in Scarlett's bedroom. The chair was obtained from one of actress Debbie Reynold's auctions. What I wouldn't give for this one. Estimate $3,000-5,000. 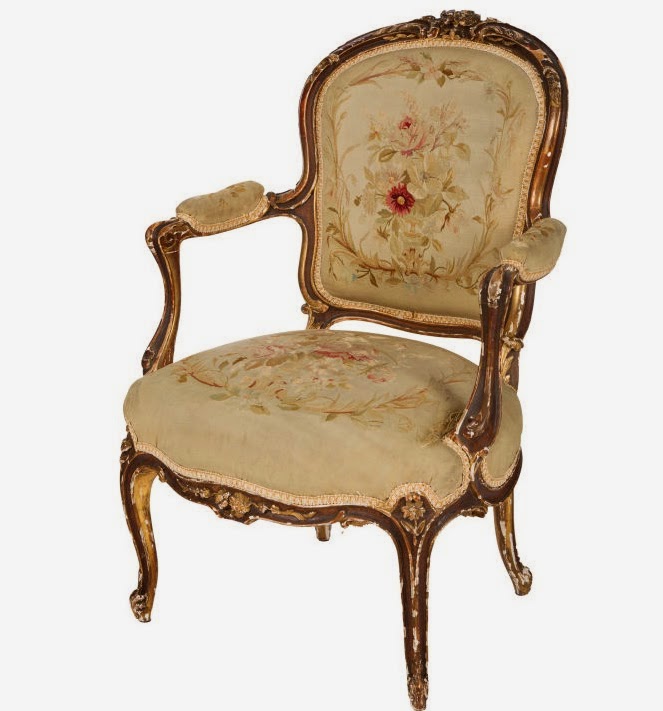 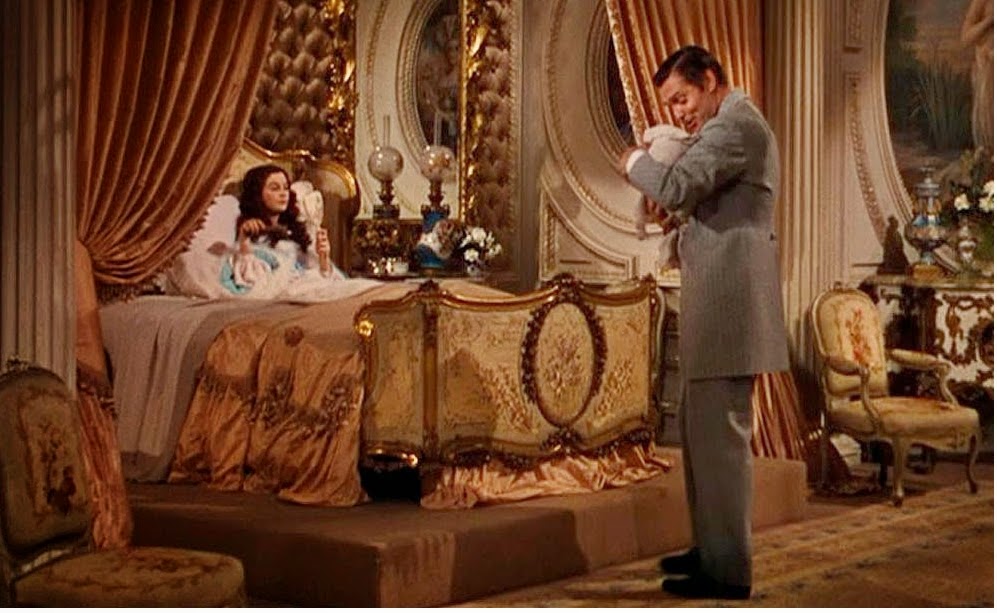 Twelve Oaks barbeque scene painted by Armando Seguso (Scarlett is in the '"green sprig" dress on the right) who created all of the original poster art for the film's 1939 advertising campaign.
Estimate $8,000-12,000. 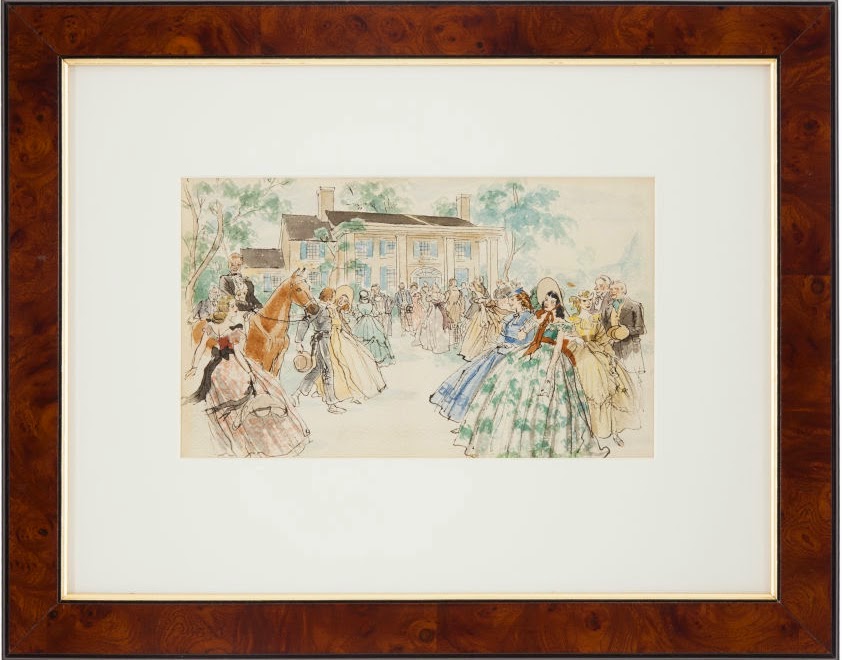 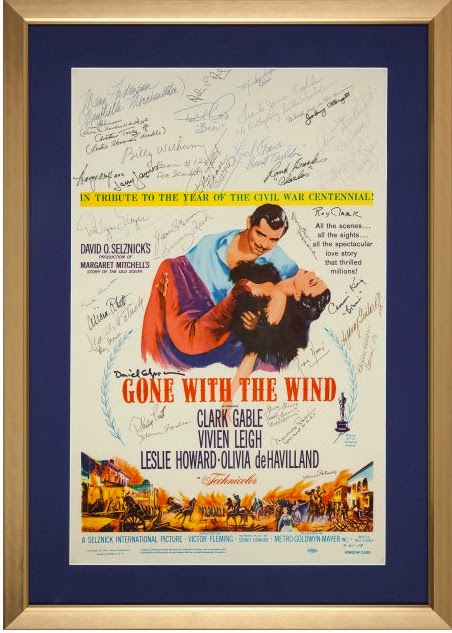 Leigh is holding her Oscar taken the night she won for Best Actress in GWTW. Photograph taken by Peter Stackpole.
Estimate $1000-1500. 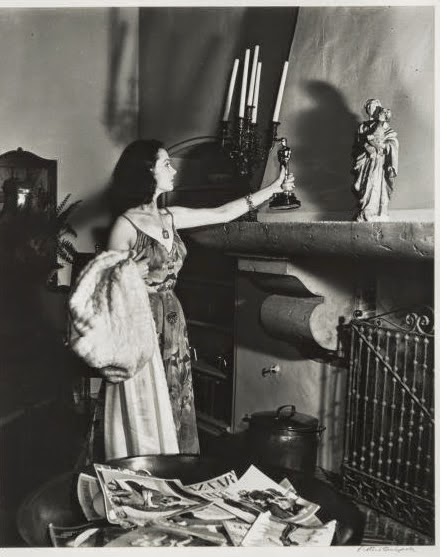 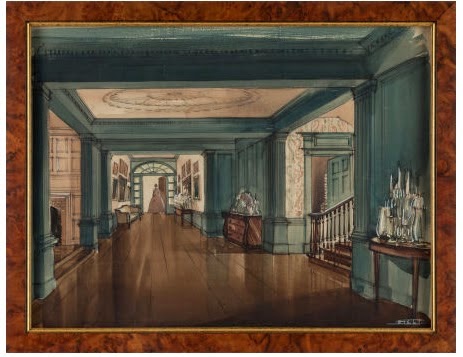 These are just a few of the hundreds of items. Happy bidding and if you can't afford/don't win, etc., remember tomorrow is another day. Sorry I could not resist:)