On the Set: The Great Gatsby 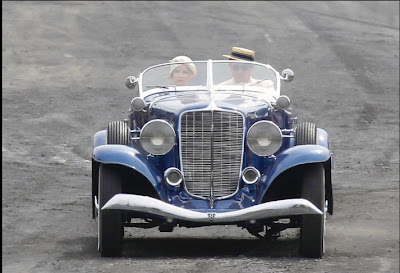 I posted back in March on the Warner Brothers remake of The Great Gatsby that is currently filming in Sydney, Australia. Directed by Baz Luhrmann, the film stars Carey Mulligan as Daisy, Tobey Maguire as Nick and Leo DiCaprio in the title role of F. Scott Fitzgerald's popular novel. Here are a precious few shots from the set and you can already see the incredible period costumes designed by Catherine Martin (and wife of Luhrmann). DiCaprio makes a dashing Gatsby (as did Robert Redford in the seventies film version) and Mulligan is a perfect Daisy. This marks the Lurhmann and Martin team's second collaboration with DiCaprio as they filmed Romeo + Juliet in 1996. 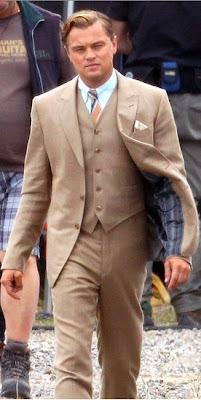 Martin is also the film's production designer. A two time Academy Award winner (Moulin Rouge) and Tony Award winner for the set design of Broadway's La Boehme, "CM" has her own line of rugs, paints and wallpapers. Many of the sparrow and vine designs are inspired by her native Australia as well as Asian designs and traditional lace. I interviewed CM on the set of the film Australia several years ago and she is a dynamo --  it's no easy feat doing double duty with costume and production design. The mother of two was also getting ready to launch the Catherine Martin line as a natural extension of her film work. The line is distributed in Australia with Designer Rugs and Porter's Paints. (You can read more of the article on my website under Articles/Four Seasons magazine).


The film will be distributed in 3D and premieres Christmas day of 2012. Needless to say, I can't wait.