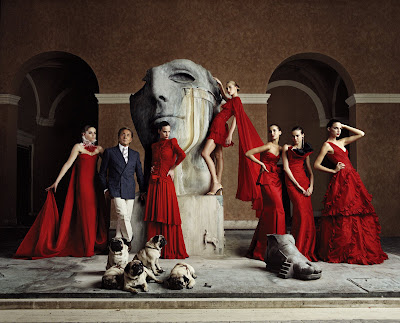 Whoever came up with the phrase "The Emperor has no clothes" certainly did not know Valentino.
Fashion designer Valentino Garavani (a.k.a. Valentino) is known for his legendary styles, combining the best of Paris couture with Italian fabrics and workmanship. He began his career in l959, launched a collection in 1962 which led to one of the largest haute couture and ready to wear empires in the world.
The feature length documentary Valentino: The Last Emperor has been out for some time and is making its way throughout the country. Rich in beauty, steeped in couture and ladened with pugs, the film offers a portrait of the man who has dressed everyone from Jackie Onassis to Gwyneth Paltrow. The style of the film has been compared to one of my favorite Italian flicks, La Dolce Vita (1960) and offers a glimpse into both his personal and business life and everything in between. Vanity Fair writer Matt Tyrnauer is the film's director.
For those of us who have not seen the film, producer Frederic Tcheng was very nice to share with me these images. Eventually Valentino will be out on DVD and will be a "must have" for any collection. Check the website for schedules and don't let this one get away....Bruno you can see any day. 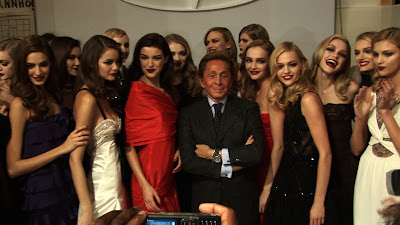 The legendary designer with his models 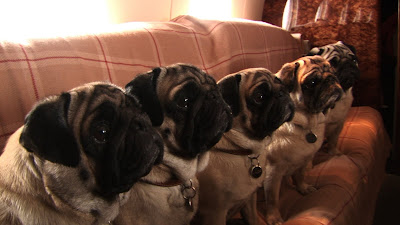 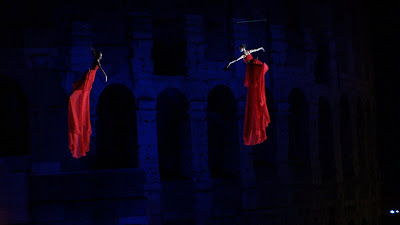 The film culminates with a retrospective/ extravaganza celebrating his 45th year in fashion at the Ara Pacis Museum in Rome. Marking the end of an era, the ceremony was certainly fitting for an Emperor. 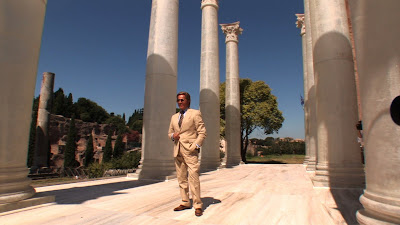 Posted by Cathy Whitlock at 10:22 AM No comments: 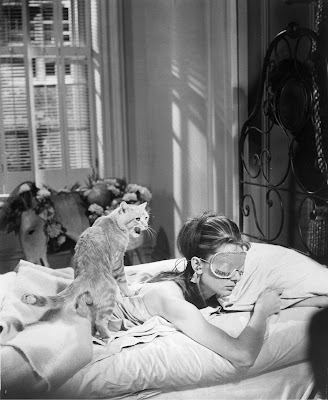 While there is no discounting the cinema's power to make a star, we often forget our four legged friends have enjoyed their time on the big screen as well. From Lassie and Flicka to Babe, Beethoven and Benji, we have laughed, cried and given the spike in spotted dog adoptions after 101 Dalmations, we have been influenced as well.
Here are a few of the famous and infamous feline, canine, equine and dare I say swines to grace the silver screen:
Lassie Come Home (1943) Pardon the pun but the beloved baby boomer television show was on the tail of the hit book and films. This particular version starred a young Elizabeth Taylor and Roddy McDowell and a canine actor named Pal as Lassie.
My Friend Flicka (1943) and Flicka (2006). The original starred yet again Roddy McDowell and quite the tearjerker. Watch at your own risk. 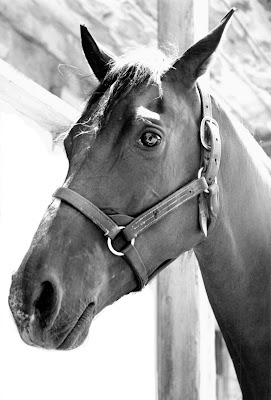 Old Yeller (1957) Yet another four hanky tearjerker film with fifties/sixties television icons Fess Parker and Chuck Connors.
The Cat From Outer Space (1978) Another animal film starring Roddy McDowell (!!!) with only a script that Hollywood could dream up.
Asta in the Thin Man series: Wire haired terrier made famous (think pre-Frasier) in the Thin Man detective series with Myrna Loy and William Powell. Shown below is The Shadow of the Thin Man (1941). 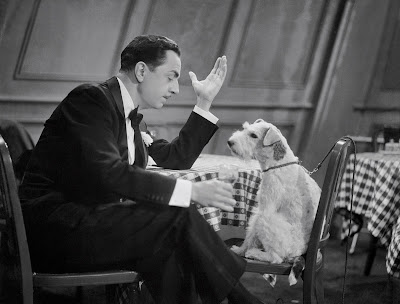 That Darn Cat (1965 and remake 1997) Hayley Mills in the original and Christina Ricci in the remake (somehow McDowell must have slept through the casting call) star in this Disney romp about bank robbers and a "mischievous cat." Isn't that a redundant term? 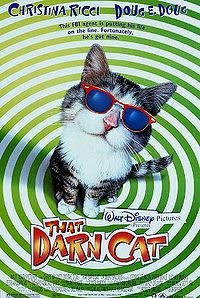 Any cat in a James Bond movie -- A white cat is always seen being stroked in the lap of a villian (seen below is SPECTRE's chief Blofeld) as he plots Bond's demise. The cat never has a name and looks pretty miserable. 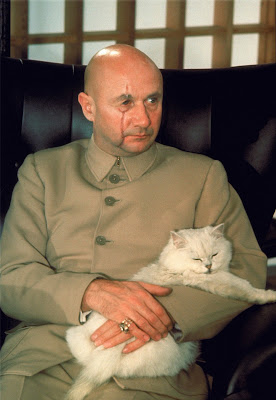 Cat in Breakfast at Tiffany's (1961) The infamous scene where Audrey Hepburn dumps him out of the taxi and into the night's rain would draw all sorts of ASPCA complaints today. Thankfully she came to her senses.
101 Dalmations (1996) Was there ever a better contrast to Cruella de Vil? The childhood book comes to life on the screen not once (1961) but three times (also 2003 when they go to London), sparking in an interest in not only dalmation puppies but anything with a black and white design. Glenn Close as Cruella practically steals the show. 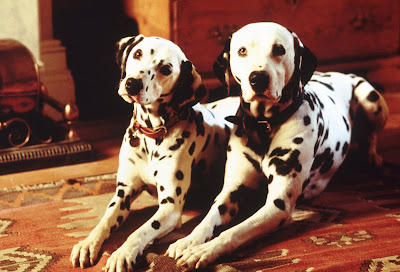 Benji (1974-2004) The poodle, schnauzer and cocker spaniel mix became a television and film sensation, no doubt spawning millions of namesakes across the country. The story lines were pretty similar to Lassie as he was always helping someone overcome something. 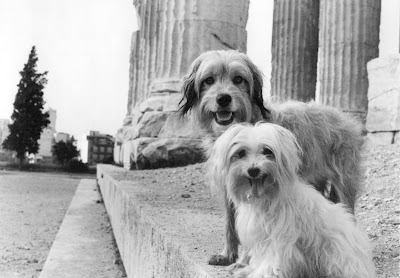 For the Love of Benji (1977)
Beethoven (1992-2008) The slobbering St. Bernard named after famed composer Ludwig Beethoven was the focus of six films. Can't blame Hollywood for cashing in on a good concept. 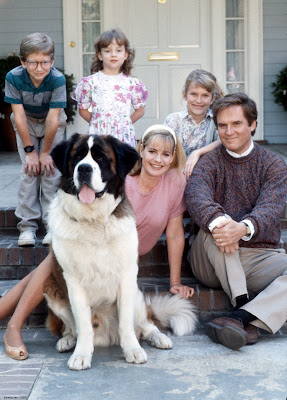 Babe (1998) is the l995 Australian film about a cute little pig with an identity crisis who wants to become a sheep dog. I defy you to order bacon again after seeing this film.
Legally Blonde One and Two (2003): Her pomeranian Bruiser (played by Mooney) was as much a fashion accessory as well as beloved pet.

and last but not least, Marly and Me (2008): I am sure it was a cute movie but no way was I sitting through a movie where the animal has to be put to sleep. Thankfully for the producers book lovers and audiences felt differently and the story was a huge hit. 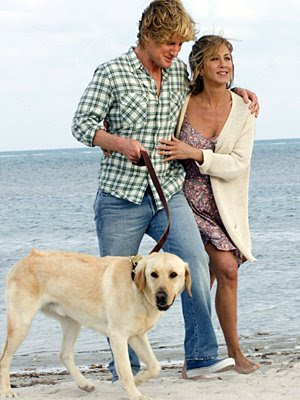 Owen Wilson, Jennifer Anniston and one of 22 Marley the dogs
used in the film
Dogs and horses (National Velvet, International Velvet, Phar Lap, Seabiscuit and the list goes on and on) seem to fare better in Hollywood than cats who are almost always cast as ominous (The Black Cat), fearful and hissing or even X-rated (remember Felix the Cat?) Perhaps it's a conspiracy or their personalities...ever try to get a cat to pose?
Many thanks to friend and designer Nora Marra for this week's blog suggestion and sorry I never got Binky an agent as I could have been a great stage door mom.
Photo Credits: Fox 2000, Paramount Pictures, MGM, ABC, Walt Disney Pictures and 20th Century Fox, Dressed: A Century of Hollywood Costume Design (Harper Collins).
Posted by Cathy Whitlock at 9:05 AM 2 comments: