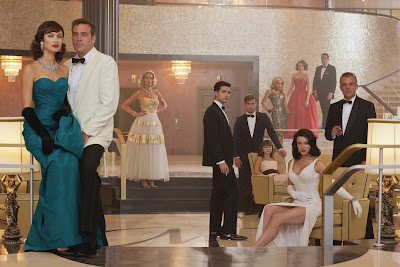 All the glitz and glamour of Miami Beach circa 1959 is captured in Magic City, the highly stylized period drama and newest entry to the sixties themed genres. (Think Mad Men meets the Mob in Miami).

Magic City is the tale of hotel owner Ike Evans (played by Jeffrey Dean Morgan who easily could be Javier Bardem's younger brother) who builds one of the largest mid century modern structures in the city. The fictitious Miramar Playa is the place where one can rub shoulders with the likes of mafia kingpin Sam Giancana (or be rubbed out), JFK, the Rat Pack or a well-to-do family of four on vacation. Evans sells his soul to Ben "The Butcher" Diamond (Danny Huston) in order to keep the hotel afloat. Lots of plot twists, family dramas, sumptuous costumes, period soundtrack....and some of the best production design I have seen on television.


Production designer and architect Carlos Barbosa and set decorator Scott Jacobsen literally channeled Miami Mid Century Modern (known as MiMo) hotels of the period such as the Eden Roc, Deauville (where producer Mitch Glazer worked as a cabana boy) and the famed Fontainebleu. Heavily influenced by the late architect Morris Lapidus who transformed the shoreline of Miami with his work, the production team literally transformed a warehouse into a grand hotel in a mere five months.

You can read more in my article "The Sets of Magic City"  for Architectural Digest. For more on the costumes, check out the LA Times piece on costume designer Carol Ramsey. Be sure and catch  Magic City on Starz Channel on Friday nights at 9 pm central -- I caught the sneak premiere last week and completely hooked. You will completely be taken back in time. Look out Mad Men.