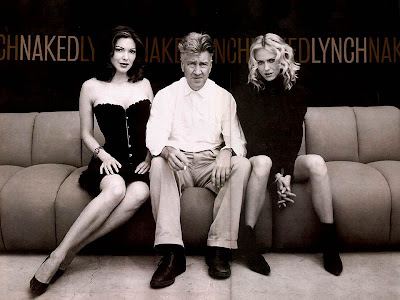 Fans of the cult film Mulholland Drive are no doubt anticipating director David Lynch's next venture. In a case of life imitating art, Lynch is opening Club Silencio, a nightclub complete with a concert hall, restaurant, cinema, and library September 11th in Paris. The idea is to create a salon for the international set to exchange ideas, make business deals, and attend screenings and literary conferences.
For those of you who did not see the film, Mulholland Drive was the darling of film critics in 2001 and considered one of Lynch's best films (the surrealist director's works also include Eraserhead, The Elephant Man, Twin Peaks and Blue Velvet). The film centers around the adventures of a Hollywood starlet (Naomi Watts) and an amnesiac (and way too convoluted to explain here) and include a visit behind the red velvet drapes of Club Silencio.
Lynch collaborated with designer Raphael Novat on the club's furniture and interiors. Details have been pretty hush-hush and only a few of his designs have been released. He has been designing furniture for the past decade (along with coffee, music and art) for Casanostra, a design company based in Switzerland. Influenced by mid-century design, many of his pieces were featured in his film Lost Highway that was shot on location in the director's Frank Lloyd Wright house.
Located at 142, rue Montmarte, the club will be open from 6 PM to midnight for members and during the witching hours of midnight to 6 AM for the non-member crowd. Or shouldn't that be the other way around?

Photo Credits: Sabine Pignalle
Also check out my review of The Help this week on The Huffington Post.
Posted by Cathy Whitlock at 10:37 AM 2 comments: Links to this post