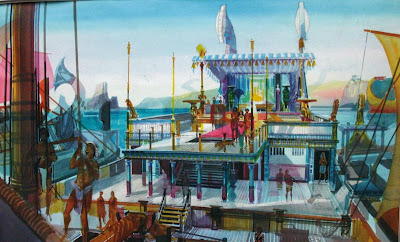 Tom Walsh, President of the Art Directors Guild and I had the pleasure of being interviewed by
Susan Stamberg of NPR's Morning Edition this past week. The show focused on Designs on Film: A Century of Hollywood Art Direction and the NPR website did a wonderful accompanying piece on their website "Long Before Computers, How Movies Made Us Believe."

I love film art and thought you would enjoy a few renderings from the book. Above is production designer John De Cuir Sr.'s barge design for Cleopatra and below is the centerpiece set for Dr. Zhivago, the ice palace. Shot on set in Spain (and in the summer no doubt), production designer John Box literally placed wax on everything inside the dacha while a prop man dutifully followed him with a bucket of cold water and splashed the wax. Hence the look of ice cycles and one of the most memorable sets in Hollywood history. 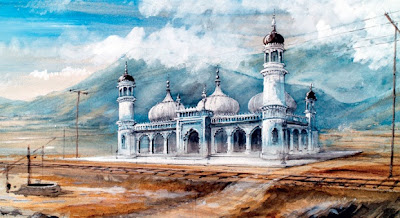 Production designer Stephen Gooson's designs for the lamasery in Lost Horizons -- built and shot on the Columbia studio ranch. The film's version of Shangri La was built to scale in two months and the designers were strongly influenced by Buddhist buildings and the works of Frank Lloyd Wright. 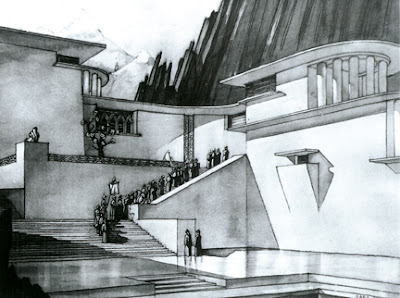 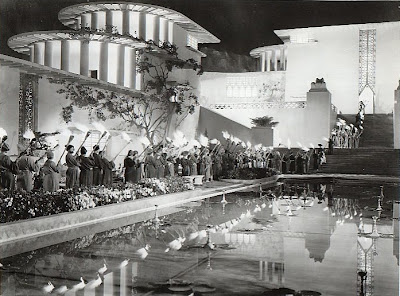 Production designer William Cameron Menzies designed over 2000 sketches for the storyboards for Gone With the Wind. The watercolor of Tara below is by artist Dorothea Holt Redmond. Tara cost $12,000 to build on the Selznick backlot and telephone poles were wrapped to resemble trees. Sorry to spoil the grandeur of Tara. 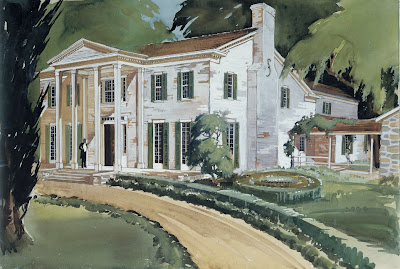 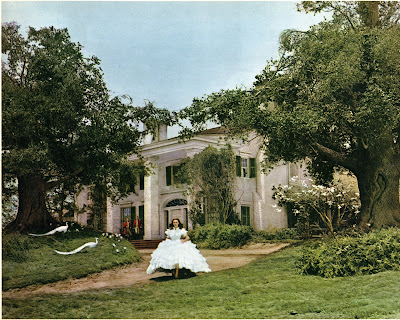 Chinatown restaurant scene with Jack Nicholson and Faye Dunaway above and continuity sketch below. The period film was designed by Richard Sylbert. 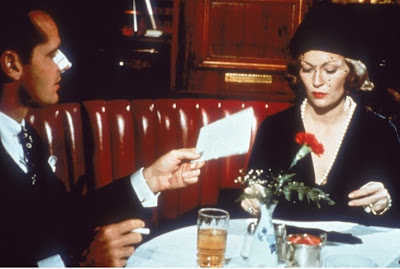 If you are in the Los Angeles area this week, I will be signing books on Thursday, February 3rd at Barnes and Noble, 1800 Crans Avenue in Manhattan Beach from 11-3 PM and Book Soup on Friday, February 4th at 7:00 PM in West Hollywood. I will also be speaking at the Beverly Hills Women's Club with a book signing to follow on Thursday evening at 6:30. For more information see their website here.
Whew!

Congratulations Are in Order 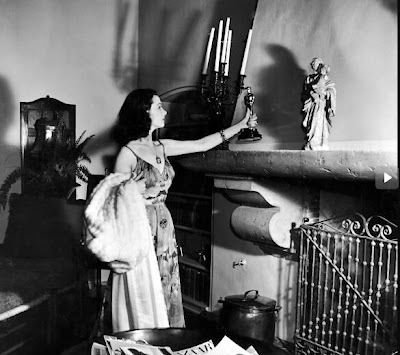 The Academy Award nominations for Best Art Direction and Best Costume were announced this morning and several of the lucky winners will soon be clearing space off the mantel. And yes, above is Vivien Leigh finding a spot for her Oscar for Gone With the Wind (1939).

And the nominees are... 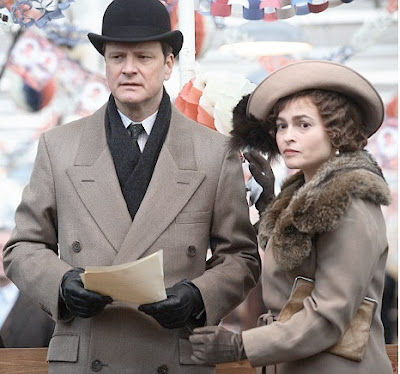 This nomination was totally expected as the costumes are impeccable, well designed and researched and most importantly, not distracting. Of special note were the King's bespoke suits and the Queen Mum's hats. (I am also hoping vintage fur was used). This is not Beavan's first time at bat as she brought home the gold for A Room With a View. 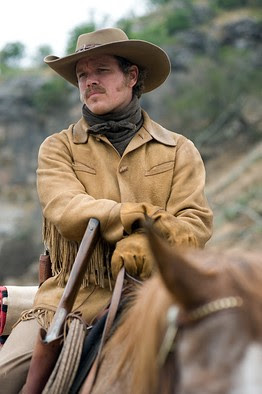 The perfect costume can immediately help an actor get into character and Zophres's designs for Rooster Cogburn's overcoat, Lucky Ned's wooly angora chaps  and La Boeuf's buckskin were as realistic as possible.  As Jeff Bridges notes, "You didn't have to do much acting to feel as if you were in those times." 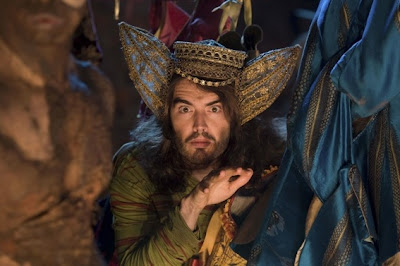 Powell's  courtly attire gives a lush feel to the Julie Taymor's adapation of the Shakespearean play. Powell won her third Oscar last year for her period designs for The Young Victoria (prior awards include Shakespeare in Love and The Aviator). 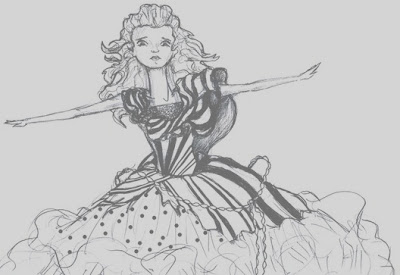 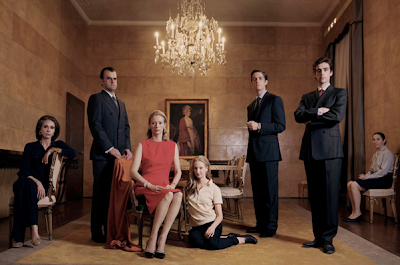 Cannarozzi collaborated with Jil Sander and Fendi for sheer perfection. The tailor made suits, Swinton's tangerine sheaths, Berenson in mink cape and Hermes were very fitting for this period drama of a wealthy Milanese family at the turn of the century. 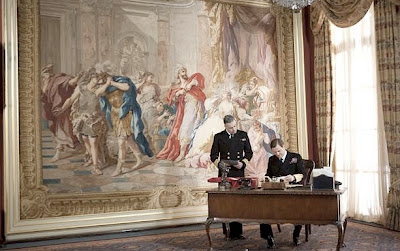 The Academy loves a period film and this nomination is certainly well deserved. Stewart had the
difficult  task of designing the world of the royals and commoners on a budget. From Logue's shabby/chic artist's studio to the stately rooms of Buckingham and Balmoral Palaces, Stewart and
have created some of the most memorable interiors of the year.
Alice in Wonderland:  Robert Stromberg, Production Designer and Karen O'Hara, Set Decorator 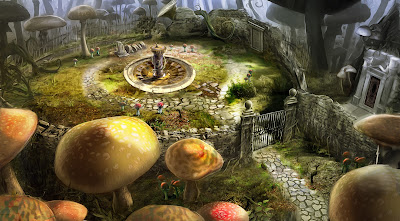 The Academy also tends to award fantasy films and this year proved to be one of the most fruitful with director Tim Burton's Alice and Wonderland leading the pack. Designed by Robert Stromberg (who won for last year's highly inventive designs for Avatar), the effects are pure "Burtonesque", alot of colorful digital eye candy as seen in Wonderland the Underland (think beneath the rabbit hole).
Inception: Guy Hendrix Dyas, Production Designer and Larry Dias and Doug Mowat, Set Decorator 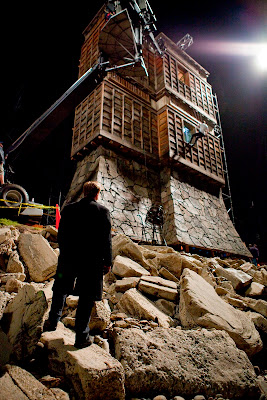 Is it a dream or is it reality? That was the challenge Dyas faced in designing the sets for Inception who literally conceived the plans on the walls of director Christopher Nolan's garage. From the dream city built by Cobb (Leonardo DiCaprio) in his own mind to the Japanese castle, 20th century architecture played a major role.
True Grit:  Jess Gonchor, Production Designer and Nancy Haigh, Set Decorator
No swinging saloon doors here, Gonchor and   meticulously designed a post Civil War town (Granger, Texas became Fort Smith, Arkansas) to represent "America on the uprise" which meant brick buildings with awnings and balconies. 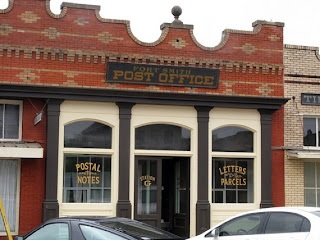 Labels: Academy Award Nominations, Alice in Wonderland, I Am Love, The Black Swan, The King's Speech

A tip of the hat to the movies 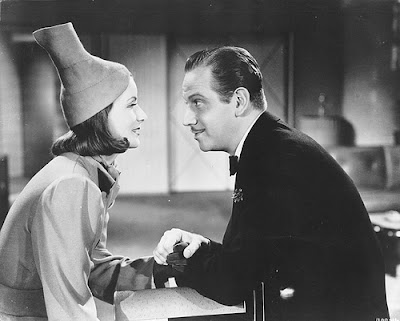 Be it a chapeau, bowler, cap or bonnet, a character in the cinema is easily identified by the hat they wear. Think of Indiana Jones sable fedora,  Bogart and his Borsalino, Garbo making a point in Ninotchka (and starting a major trend), Bonnie's beret, Eliza Doolittle's over the top Edwardian number or Samantha's straw beach hat on steroids worn in Sex and the City and you get the picture.
Such is the topic of the "Cinema with a Hat: Borsalino and Other Stories," a unique exhibition in Milan that explores the connection between headgear and the movies. The exhibition tells the relationship of the hat and its ability to arouse emotions -- fear and seduction for example -- as well as making a show-stopping fashion statement on screen. Much of the displays are also devoted to Borsalino, a name synonymous with the classic men's felt hat.
The exhibit at the Triennalle di Milano runs now through March 20th so if you can't get away/snowed in/totally unfeasible/no time, I suggest watching Suzy Menke's interview for the New York Times below and enjoy!
Posted by Cathy Whitlock at 12:20 AM 7 comments: