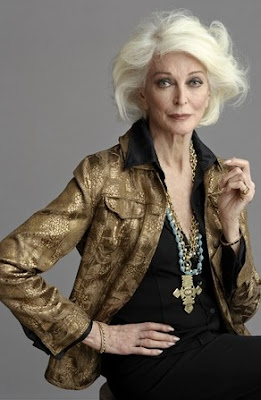 The Sundance Film Festival announced their line-up this week and one in particular will be of interest to baby boomers and/or fashionistas everywhere. About Face is a documentary about fashion models of the seventies and eighties and their career highs and lows and the inevitable work tolls of aging. If you don't recognize the names -- Carmen Dell'Orefice (still stunning in her eighties), Cheryl Tiegs, Jerry Hall, Christie Brinkley, Dayle Haddon, Carol Alt, Isabella Rossellini and Kim Alexis -- you will no doubt recognize the faces. Many became actresses, married rock and sports stars, retired or as in the case of Dell'Orefice, lost all their money to Bernie Madoff. And several are still going strong today as the baby boomer generation has made it cool to be "of a certain age."
Sundance runs January 19th to the 29th and if aren't lucky enough to attend, About Face will be shown on HBO next summer!
Photo Credits: Timothy Greenfield-Sanders
Posted by Cathy Whitlock at 8:19 AM No comments: