Tony Walton, Michael Jackson and The Wiz that Was 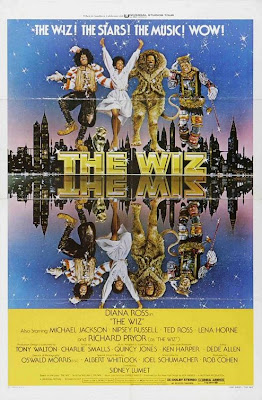 While we are on day five of the no-doubt-it-will-be-tabloid-torrid-soon Michael Jackson news cycle, I thought I would feature some little seen images from what I hope were his happier days.
Emmy, Tony and Oscar winning production, set and costume designer Tony Walton (All That Jazz, Mary Poppins and Broadway's Pippin just to name a few) shared with me his Oscar nominated set and costume work for the 1978 film The Wiz. The film was the adaptation of the hit Broadway musical of the seventies and the African American version of the L. Frank Baum classic The Wizard of Oz. Directed by Sidney Lumet, it featured Diana Ross as Dorothy, Nipsey Russell as the Tinman, Richard Pryor as The Wiz and a young Michael Jackson as The Scarecrow. Lena Horne (Lumet's now former mother in law) played Glinda the Good Witch. (And yes, I thought it was Glenda all these years too). 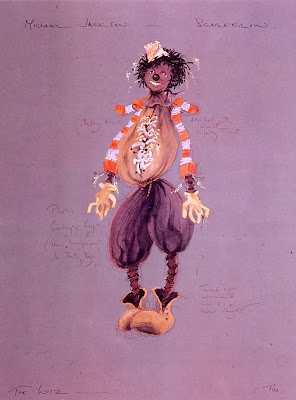 Walton's sketches for Michael Jackson as the Scarecrow 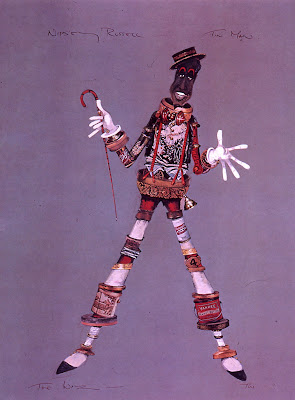 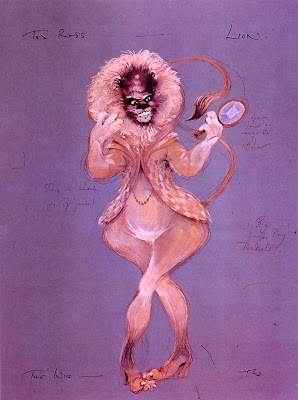 Sketch for the Cowardly Lion
I was fortunate to work on the publicity for the film although all I can remember was the
great party held at the World Trade Center (which was the location for many of the film's Emerald City scenes). Universal spent a record $24 million on the production, making the movie the must expensive musical made up until that time. Studio execs were worried Ross was too old to effectively play Dorothy and rumor had it she won the coveted role by promising to deliver the pop sensation as The Scarecrow. Sadly Jackson's dance skills were never fully utilized in the film (of course this was pre-Moonwalk days). And even sadder for his fans, he had only one solo number, "You Can't Win" which was at the film's end. 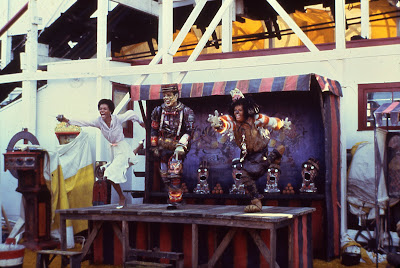 Ross, Russell and Jackson on set 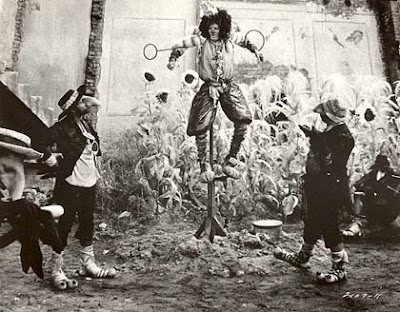 Jackson as The Scarecrow
The multi-talented Walton (one of the most charming men you will ever meet and former husband of Julie Andrews) designed the sets along with Philip Rosenberg, creating a yellow brick road out of Congoleum at the Astoria studios in Queens. Apparently the flooring company came out with a style called Yellow Brick Road in their collection shortly after the film premiered. Many of the film's special effects were created with matte paintings (as evidenced by the Manhattan skyline scenes below) by the Hollywood master Albert Whitlock (no relation!). 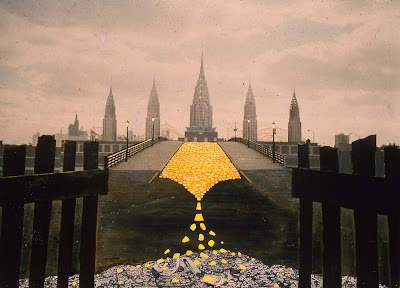 Photo Credits: Tony Walton, Universal Pictures.
A side note: While it has been quite a week for notable passings, I have to mention my beloved cat of fifteen years who passed away over the weekend. Binky had hyperthyroid disease for the past five years, a condition which is treatable but eventually leads to kidney disease, heart failure etc. If your animal is losing weight rapidly, I urge you to get him/her checked immediately and begin treatment. The disease is possibly caused by the chemicals found in fabrics and carpet -- I guess all these years of Binky hanging around my interior design office took its toll on him. His passing has certainly taken its toll on me! 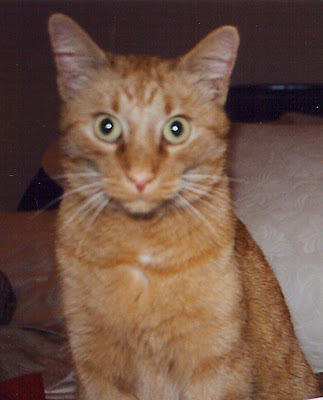