Four Score and Seven Vampires Ago.... 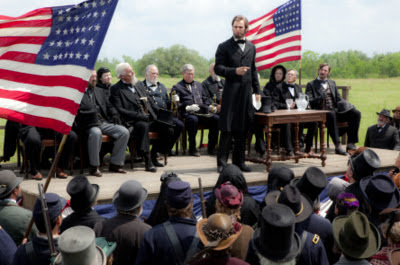 As the subject of not one but two movies and countless books this year, our 16th president is enjoying his time in the spotlight. Add the public's obsession with all things vampire and you have the perfect storm -- Abraham Lincoln Vampire Hunter.

Based on Seth Grahame-Smith's popular novel of the same name, producer Tim Burton and director Tim Bekmambetov bring the story of a President who rules the country by day and battles the forces of evil by night to the big screen. Benjamin Walker (who starred as Andrew Jackson in Bloody Bloody Jackson on Broadway), portrays Lincoln and Rufus Sewell (many of you might remember him as the Kate Winslet's one-sided love in The Holiday) as his nemesis.

And while a story of this nature might be the last place you'd find interesting design, think again. Production designer Francois Audouy and set decorator Cheryl Carasik designed a pretty spectacular plantation lair for Lincoln's bloodthirsty foes along with a French colonial transformation of a Garden district Greek Revival manor and a Zuber panelled White House interior.


For more on the film's designs, see my article The Sets of Abraham Lincoln Vampire Hunter in Architectural Digest. Honest Abe and his ax-wielding ways open at a theater near you Friday, June 22nd.