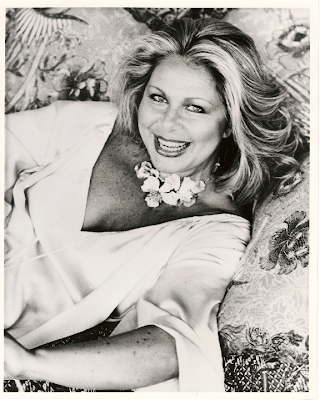 She's been called brash and brilliant, cutthroat and charming and a pioneer and a trailblazer. Most notably, she paved the way for women in the entertainment industry at a time when it was dominated by men. The legendary agent Sue Mengers passed away last week at the age of 78.
The Mengers story could be the stuff of film and fiction (it's often said the role of Dyan Cannon in 1973's The Last of Sheila was inspired by the petite dynamo).  Her family barely escaped the Nazis in Hamburg, Germany by fleeing to the United States where she  learned English from the front row of a movie theater. She eventually set her sights on a career in show business, working as a secretary at the William Morris Agency.  Dedication, networking, and a large amount of chutzpah landed her a spot as a junior agent and she eventually left for CMA (which became ICM years later) and represented some of the biggest stars in the stratosphere. Her roster at the time was beyond who's who -- Jack Nicholson, Gore Vidal, Candice Bergen, Peter Bogdanovich, Michael Caine, Barbra Streisand, Ali MacGraw, Ryan O'Neal, Steve McQueen and Faye Dunaway just to name a few.
And the stories were the stuff of legend. She would hold court in her Bel Air French chateau style home (once owned by Zsa Zsa Gabor) and later her John Elgin Woolf designed residence in Beverly Hills (one of the true originators of Hollywood Regency Style) for A-list members of the worlds of film, theater, journalism and publishing that would go well into the night. She loved to smoke more than the occasional joint, excelled at playing matchmaker (it was said she fixed up Barry Diller and Diane Von Furstenberg), and was known for her acerbic tongue and wit.

Mengers once got the attention of actor Tom Ewell by dropping her business card in his soup (yes, he signed as a client), rented a mink coat to impress and pitch a producer at dinner and thought nothing of playing liar's poker to get her stars the best deal. She often compared herself to Eve Harrington in All About Eve while Time Magazine noted that she was a "cross between Mama Cass and Mack the Knife" with the "subtle approach of a Sherman tank." While she had her share of detractors, Mengers was the type of agent and friend you want to navigate the shark infested waters of Hollywood.