The Accidental Princess in Monte Carlo 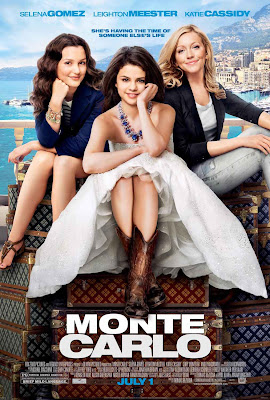 Opening in theaters today is this summer's teen escape movie Monte Carlo. And while it caters to a certain demographic, viewers will no doubt enjoy the scenes of Paris and Monte Carlo --  think of it as a two hour time transport without packing a single bag.

Part Roman Holiday and part How to Marry a Millionaire, Selena Gomez becomes an "accidental princess" when she travels to Paris with her family and a case of assuming another girl's identity turns into the trip of a lifetime. There are lots of great yacht parties, polo matches, eye candy, charity balls and luxurious hotels. And even though the reviews have been somewhat tepid, it's the ultimate two hour great escape. 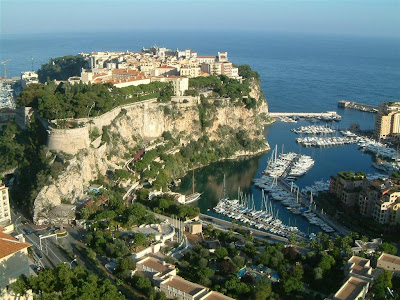 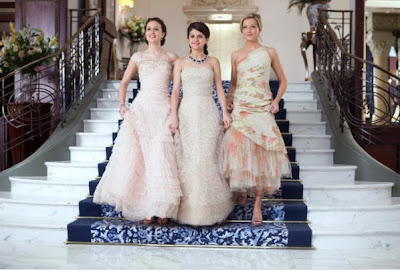 The film also stars Leighton Meester of Gossip Girls and Katie Cassidy of Melrose Place and Nightmare on Elm Street. I love that the director wanted a "Neapolitan ice cream" effect with the casting as the women have three very distinct looks and personalities. Andie MacDowell plays Selena's mom. 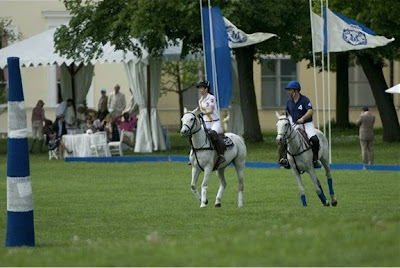 The story takes place at the Hotel du Paris (can you tell I have a bad case of wanderlust this summer?) which was only used for a few days of filming due to limited access. Production designer Hugo Lucyzc-Wyhowski recreated the hotel on a soundstage in Budapest,  duplicating a convincing replica of the lobby and the Grimaldi Suite (of Prince Rainer fame). The regal Hotel du Paris was built in 1864 and showcases incredible marble pillars, Louis XVI furnishings, crystal chandeliers and tapestries in its Art Noveau structure. 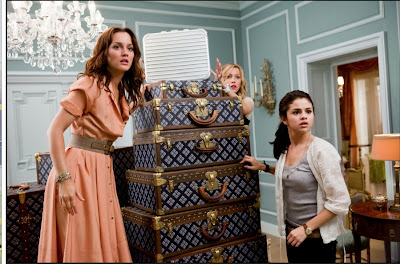 And yes, the Texas scenes were also filmed in Budapest and often the audience is none the wiser. Filming also took place at the Stefania Palace which doubles for Monaco's Da Silva Ballroom and the Hungarian State Opera Palace. The magnificent Villa Eilenroc in Cap d'Antibes also has its moment in the spotlight. Once the property of American philanthropist Louis Beaumont and his opera singer wife, the picturesque home and gardens now belong to the city. 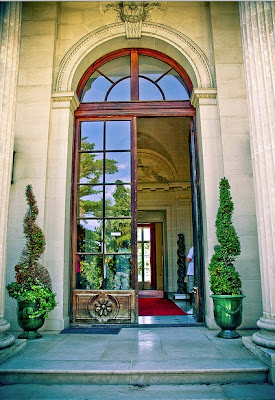 The costumes will not disappoint as couture dresses were custom made or borrowed from archives and include classics from Dior, Chanel, Oscar de la Renta and Gucci. The girls are also sporting outfits from  Zara, Theory, Miu Miu and Diane von Furstenberg. 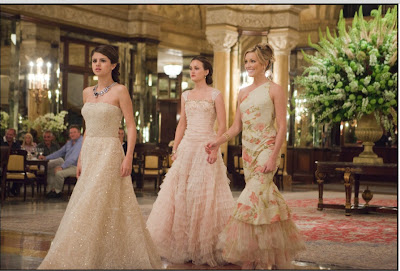 The timing of this film could not be any more perfect with today's Prince Albert nuptials  as Monaco will be in the news all weekend. (I am thinking TBS might consider showing the "The Runaway Bride" this weekend as well but I digress...) In the meantime, you might check out Hitchcock's  To Catch a Thief which also had some memorable scenes in Monaco. Legend has it that Princess Grace died on the very same road that the famous car chase occurred in the film in another twist of timely irony.

Happy July 4th holiday and speaking of holidays, many thanks to the editors of High Gloss magazine who featured Designs on Film and Cinema Style in their July/August this month. They highlighted one of my favorite holiday films....The Holiday. Enjoy! 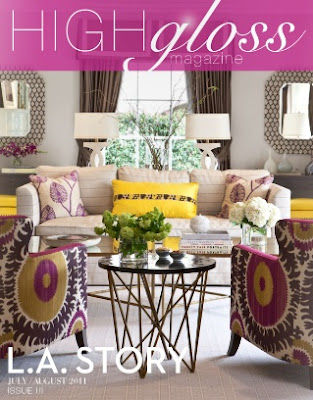 Posted by Cathy Whitlock at 3:03 PM 5 comments: Links to this post 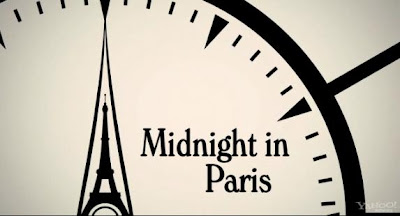 While the proverbial City of Lights is obviously front and center in Woody Allen's romantic comedy Midnight in Paris, the scenes of Le Bristol Paris were the ones that caught my eye.


Located near the Presidential Elysee Palace on Rue du Fauborg Saint Honore', the hotel has played host to the likes of Angelina Jolie, George Clooney, Charlie Chaplin and Marilyn Monroe as well as sharing the screen with Owen Wilson and Rachel McAdams. Carla Bruni (who also just happens to be the First Lady of France and a co-star in the film) holds court there regularly at the Bristol's brasserie 114 Fauborg. And in a case of " if these walls could talk," songstress Josephine Baker celebrated her career in 1975 with Mick Jagger, Princess Grace and Sofia Loren at the Bristol. 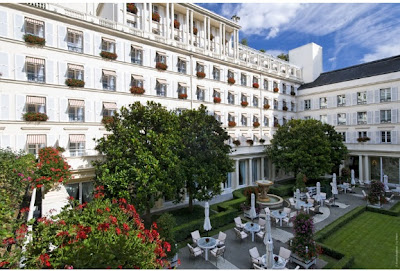 From an interior design perspective, the well appointed rooms are spectacular thanks to a thirty million dollar renovation supervised by the owner, Mrs. Rudolph Oetker. Furnishings and draperies are decorated with the hotel's signature Toile du Jouy and color and patterns abound. The rooms are 18th century elegance (with a contemporary cutting edge) and filled with Gobelin tapestries and old master paintings. If you are lucky enough to stay in the penthouse suite like pop star Prince, expect to fall in love with the elegant yellow Empire sitting room. 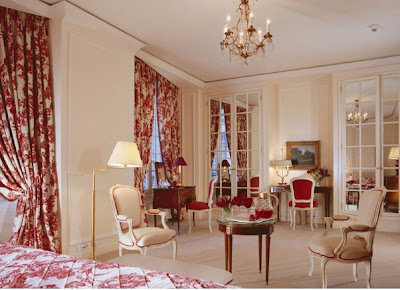 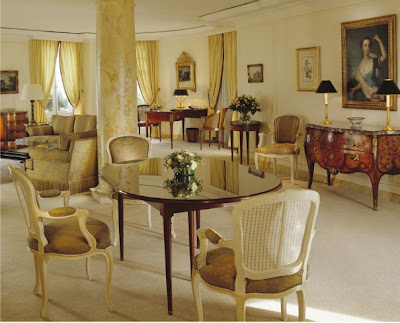 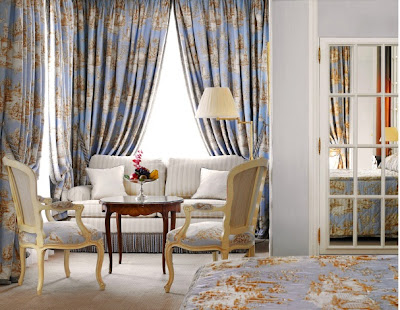 History is preserved as well as the revered landmark has a restaurant that dates back to 1829 and the glass and wrought iron elevator was designed by a Jewish architect hiding out from the Nazis during World War Two. The five star hotel touts the city's largest bathrooms and the penthouse pool features a sweeping panoramic view of Paris. "Fashion High Tea" also offers haute couture showings from the latest collections. Let's face it, at eighty years young, the place is still fabulous. 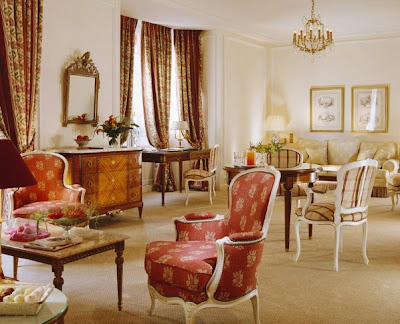 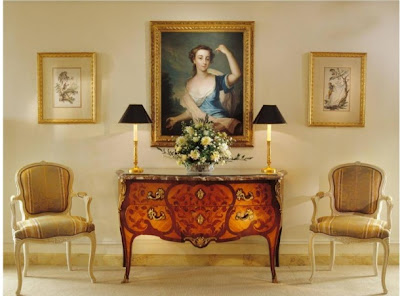 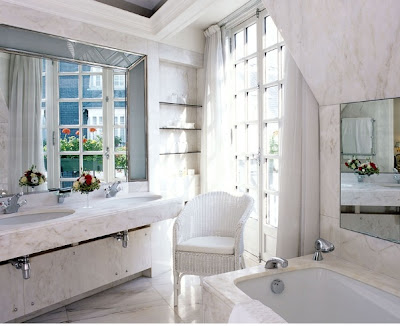 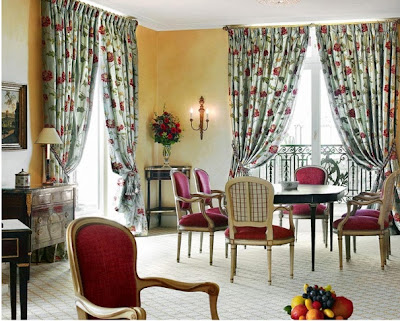 And for those of us who are animal lovers, a most unlikely ambassador in the form of a  Birmen kitten named Fa Raon has a commanding presence in the lobby. 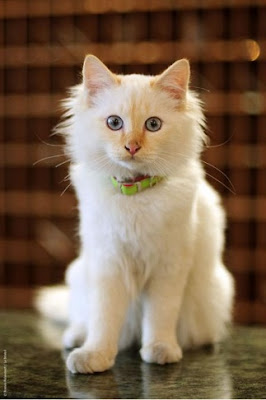 And if you can't afford the room's luxury style rates, you can always buy a robe (as worn by McAdams in the film) at the hotel gift shop. 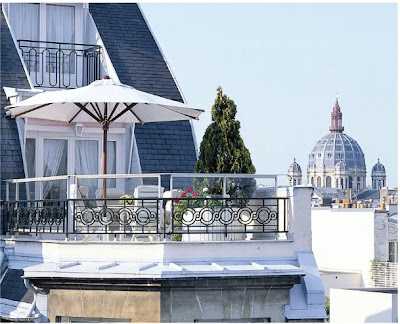 The gardens of Versailles also have their cinematic moment in the spotlight (actually the famed palace and environs have been featured in 165 films to date). A must see anytime you are in France. 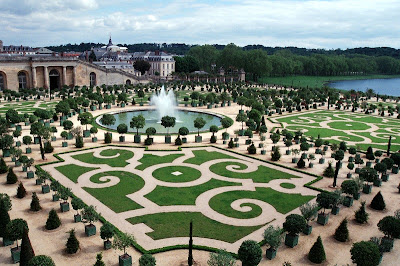