The Good Life of The Good Wife 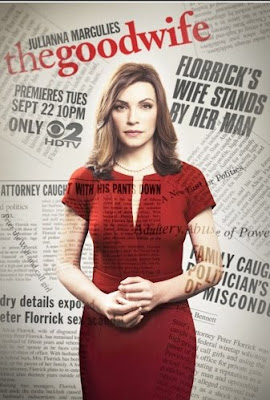 The story line is timely and painfully similar to real life events as the wife of a politician is left to pick up the pieces after her husband's very public betrayal. Such is the tale of the CBS hit The Good Wife which airs every Tuesday at 9:00 CST. The show stars Julianna Marguiles as Alicia in the title role (you no doubt remember her from NBC's ER) and Chris Noth as her wandering husband and former State Attorney of Cook County turned jailed felon ("Mr. Big" from Sex and the City). Alicia is forced to pick up the pieces and go back to work as a junior litigator in a very political law firm. 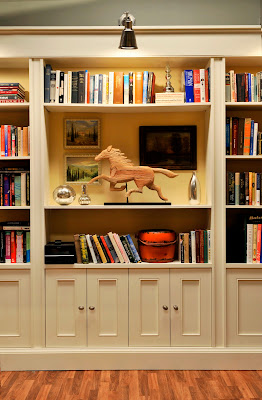 Much of the drama's story line takes place in Alicia's Chicago apartment designed by production designer Stephen Hendrickson (Wall Street and Arthur) and set decorator Beth Kushnick (Reversal of Fortune and Fringe). Alicia's former world was a life in a North Shore suburb, now she returns to Chicago with her young teenage children in tow. As in real life, Alicia is forced to scale down and adapt her old life and furnishings (a.k.a. suburbia) to her new digs as she makes a new life for herself. 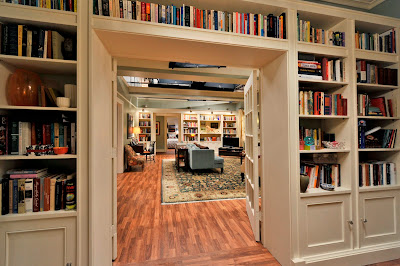 While much of the show takes place in the courtroom and on location and Kushnick explained that a great deal of the drama occurs with Alicia and her children at their apartment. "We strived to make it comfortable and layered with life," she says. "It has a feeling of family history with items collected over the years and handed down through the family." 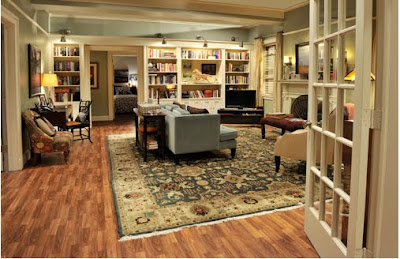 Details are very important in set decoration as they can immediately shorthand a character and their life. Things that are never seen on the screen -- such as "a random earring, a chiropractor's business card, etc," can help the actress to stay in character. The design team went for a "renovated but traditional style of architecture" with a cooler color palette as opposed to blood red (as in blood sport which was a directive by the powers that be) for the law offices. 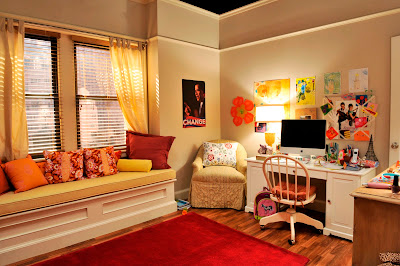 Daughter Grace's Bedroom
Alicia is one of the strongest female characters on television yet with a soft side and the set decoration certainly reflects that. Kushnick notes that the character went from a shared life with a king-size bed but has not devoted much attention to herself as an estranged parent. Very little of Noth's character in terms of photos or belongings are seen in the apartment. 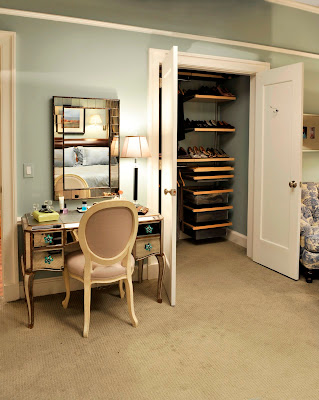 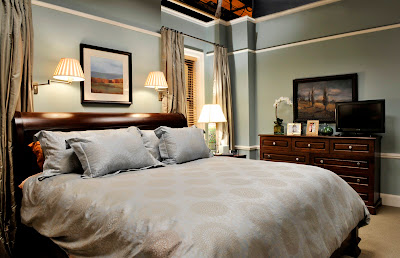 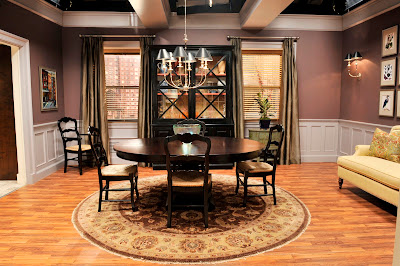 Deep eggplant was chosen for the traditional dining room 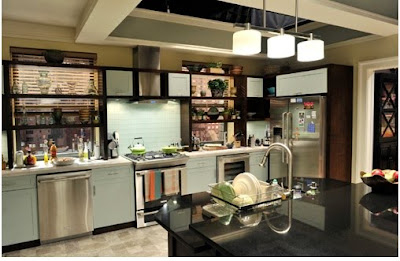 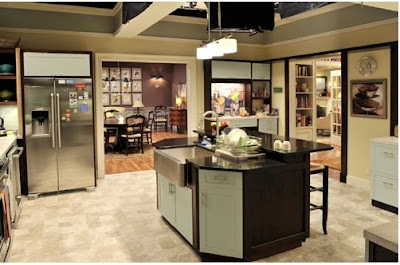 This is one show I do not miss (or at least Tivo!) Great writing, compelling stories, wonderful acting and terrific sets -- let's hope this show has a long run on CBS. 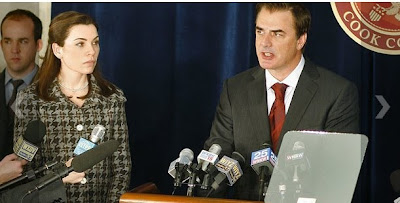 On another note, congratulations to fellow writer and blogger Emily Evans Eerdmans and Andrew McKeon on their recent nuptials. Emily wrote the book Regency Redux (Rizzoli) which is a must have for film fans, particularly those that love older films. She has a great chapter on the films of art directors Van Nest Polglase and Cedric Gibbons from the 30's and 40's and her namesake blog is must reading as well. Congrats Emily!! 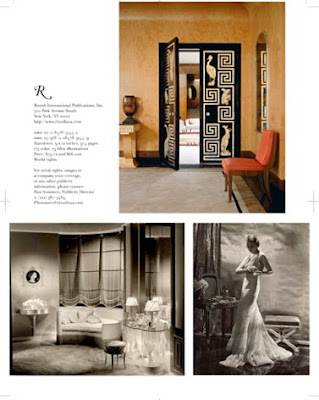 For Your Consideration: Best Art Direction 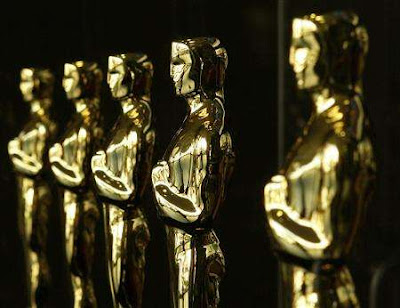 With the announcement of the Academy Award nominations just mere weeks away (Feburary 2nd for those waiting by the phone), the speculation process turns into a mini Olympics for the film industry, pundits and avid moviegoers alike. The Art Directors Guild recently announced their nominees for Excellence in Production Design (which includes period, contemporary and
fantasy categories) and often gives clues to who will be nominated for the coveted Best Picture....and who will not.
The following are a few of the Guild's nominated films. Let the games begin! 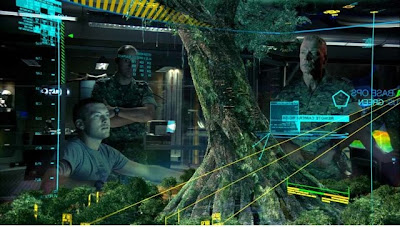 Avatar (Warner Brothers)
Production designer Rick Carter (the genius behind Forrest Gump, Jurassic Park, War of the Worlds and The Polar Express), designed the sci-fi film's Pandora's dream state visuals (coined by director James Cameron as "phantasmagoric") which are a huge hit with 3-D goggle wearing audiences everywhere. Carter reportedly described the project to Cameron as "The Wizard of Oz meets Apocalypse Now" and the film's innovative designs of Pandora's ecosystem rise to the challenge. Avatar will no doubt be nominated in the Best Visual Effects category as well. 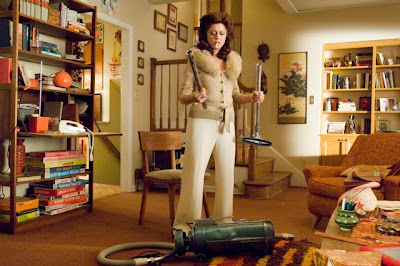 Actress Susan Sarandon in The Lovely Bones
The Lovely Bones (Dreamworks/Paramount Pictures)
Based on Alice Sebold's best-selling novel, Bones is the story of a young woman who is murdered by a serial killer and watches her family deal with the aftermath from heaven. Production designer Naomi Shohan and set decorators George de Titta Jr. and Meg Everist created a small town seventies style suburbia to perfection. 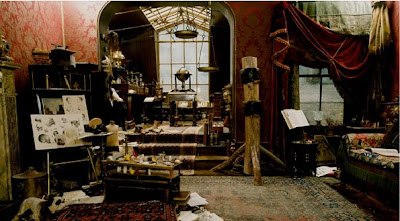 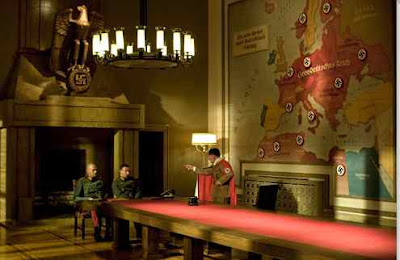 Inglorious Basterds (The Weinstein Company)
Who but Tarantino to do World War II on steriods? Production designer and set decorator team David Wasco and Sandy Reynolds-Wasco used Paris is Burning (1990), The Dirty Dozen (1967), Where Eagles Dare (1968) and Sergio Leone films as reference points in designing Nazi occupied France (which was largely filmed in Berlin). Shown below is the dictator's military complete with oversize map, overscaled table and signature Nazi red - all very Hitleresque. 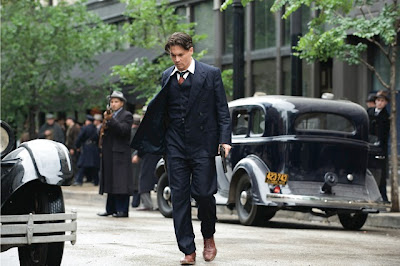 Public Enemies (Universal)
Production designer Nathan Crowley took a break from his Batman duties (The Dark Knight and Batman Begins) to craft a thirties period environment for John Dillinger. Along with set decorator Rosemary Brandenburg, the design team used actual historic locales such as "The Little Bohemia" lodge in Wisconsin where he evaded the Feds and reinterpreted a gentrified Biograph Theatre in Chicago. 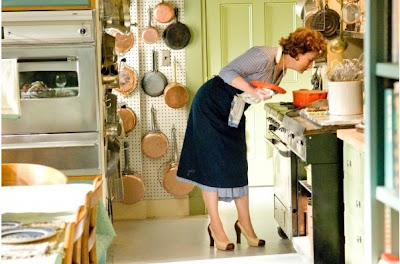 For more on the Art Directors Guild nominations, see their website.