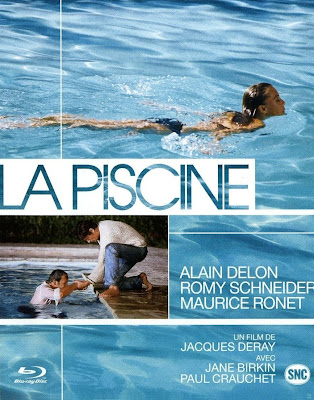 The 60s film La Piscine (The Swimming Pool) provided the perfect inspiration for Tory Burch's Spring 2014 line that debuted today at Fashion Week. Starring Alain Delon, Romy Schneider and Jane Birkin (of Birkin bag fame) , the drama tells the tale of a couple, father and daughter who share a villa together on the Côte d'Azur. Sexual jealously plays a dominant theme and it's interesting to note that Schneider and Delon were an offscreen couple at one time and remained friends during the filming.

French fashion designer André Courrèges served as costume designer on the film and it's easy to see how his modern geometric designs (think triangles and squares), casual preppy looks, French Riviera bikinis and long maxi dresses influenced Burch's line. (Courrèges is credited - along with British 60s designer Mary Quant - with the invention of the mini-skirt). The bohemian yet tailored and simple costumes are as classic today as they were in the sixties.  He once made the statement, “High heels are preposterous. They are just as absurd as the ancient practice of binding the feet of Chinese women. Boots are a more feminine solution – and more rational and logic. Beauty is logical.” Given our Manolo obsessed society, I wonder what he thinks about them now.

Tory Burch's Spring 2014 line is filled with botanical themes in green and white, wicker totes, metallic low heels, lattice cutout leather, linen burlap and two piece pant sets with a Preppy Meets the French Riviera look. While summer is barely a distant memory, I look forward to collecting some of these items for spring! And renting La Piscine on Netflix.

All items are available at Tory Burch. Check out her playlists on Tory's Blog while you are there as I always discover new music!

Posted by Cathy Whitlock at 3:06 PM No comments: