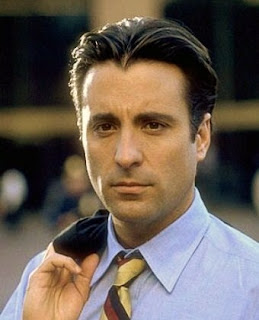 I have had a busy summer so far (unfortunately all work and no play) and decided to let  Design Shuffle write a guest blog today. Design Shuffle is a wonderful site that showcases the work of interior designers and home enthusiasts and they also appreciate film and design.

I have been a long time fan of actor Andy Garcia from The Untouchables and Godfather III to the HBO film For Love of Country (great soundtrack by the way) and had always heard of his home on the Biscayne Bay. Below is Susi of Design Shuffle's story, enjoy!

Andy Garcia's Biscayne Bay home was featured in the New York Times Home and Garden section in 2006. Inspired by the dream of his childhood in Cuba and the old plantation homes there, Garcia hired friend. Miami interior designer and architect, Deborah De Leon, to design the house after the original house was destroyed by hurricane Andrew in 1992. Built in 1999, the Garcia home looks and feels like a house that was built in the 1920s or 1930s with its wrap around verandas.  Consisting of five bedrooms and a separate music studio, pool and pier on the bay, the house is a gathering place for friends and family. 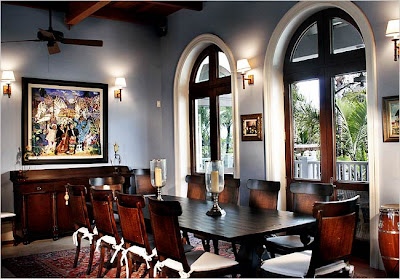 The large great room has a casual but elegant feeling with light slipcovered seating and dark woods. The opposing, large arch windows allow a cross breeze to cool the space.  The arches are carried over into interior doorways as well giving the space a harmonious feeling. With a table to seat twelve, the great room is often a gathering place for family and guests. The room has a musical theme with Garcia's Steinway and two 1950s Cuban conga drums, restored by Mr. Garcia. The art on the wall is a collage of Mr. Garcia, crazy with happiness, playing the congas with his boyhood idol, the mambo bassist Israel LÛpez, known as Cachao, on bass.

The exposed ceiling beams are structural, made from Guyanese hardwood, and appear throughout the house. The kitchen is a blend of warm creams and yellows with dark woods, vintage lighting and top level appliances. The large island and stools create a gathering space in this inviting room.


For those of you who love an inviting Latin inspired interior, I am sure the Garcia's home will be one of inspiration. And for more on the talented actor, check out the cover story on Celebrated Living.