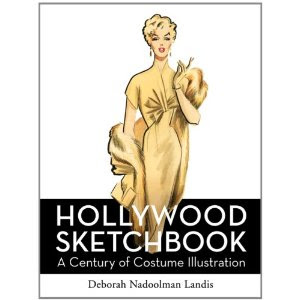 Just in time for Christmas gift giving comes a lavishly illustrated book on Hollywood costume illustration, perfect for anyone who loves fashion, film and art. Author Deborah Nadoolman Landis (who wrote the wonderful Dressed: A Century of Hollywood Costume Design - Harper Collins) features the work of one hundred costume artists of the last century. From Cecil Beaton's sketches of My Fair Lady and Walter Plunkett's designs for Gone With the Wind to Irene Sharaff's costmes for Funny Girl and Katharine Hepburn's favorite designer Adrian, Hollywood Sketchbook takes a fascinating behind- the- scenes tour of an incredible art.

Landis also curated an exhibit on 1o0 of the most iconic costumes on film at London's Victoria and Albert Museum. Hollywood Costume runs through January 27, 2013.


I have received many emails in regards to Cinema Style's absence for the past month. My mother Dorothy Whitlock passed away several weeks ago -- she was a great fan of movies and fashion and a huge supporter of my work. She took me to my first film "Pillow Talk" and the proverbial die was cast. She will be dearly missed.