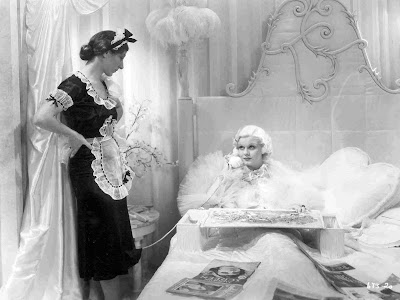 Eleven shades of white?
That is the exact number of shades used by art directors Hobe Erwin and Frederic Hope for MGM's film Dinner at Eight (1933). One of the first true films to chronicle the art of social climbing, director George Cukor cast John Barrymore as a washed up matinee idol, real-life brother Lionel as a shipping magnate trying to save his family's firm while his wife Millicent tries to throw the ultimate dinner party. Set against the Manhattan backdrop of a looming Depression, Jean Harlow (as a social climbing bimbo) lounges in bed, eats bon bons and along with the designs, steals the film in every scene she appears. 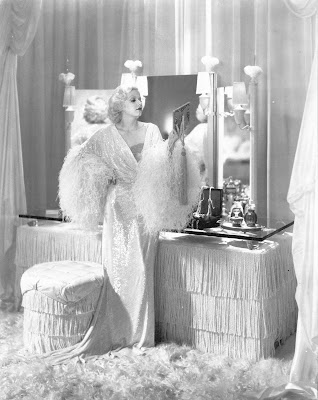 The thirties sets were significant as it marked a time in Hollywood film design known as the BWS - Big White Set. Also coined the "polar bear" or "white telephone look", white was the dominant color. The original design is credited to the Astaire-Rogers musicals where angles, glossy reflective surfaces and Streamline Moderne was the order of the day. The look was also the result of the development of incandescent lighting -- the use of stark white would have blinded the viewer otherwise. 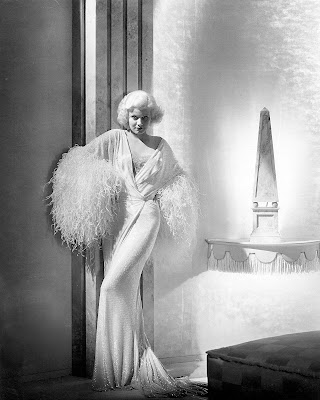 The Platinum Goddess a.k.a. "High Priestess of White"
Harlow's Manhattan apartment utilized elements of art deco while playing up her trademark assets - platinum hair and white powdered skin. Costume designers clothed her in white satin gowns (the gown above was known as the Jean Harlow Dress) while cinematographer William Daniels used gauze on the lens to film the iconic star. It's been said the MGM chief Louis B. Mayer did not want Harlow for the part and had to be convinced she was a comedienne. 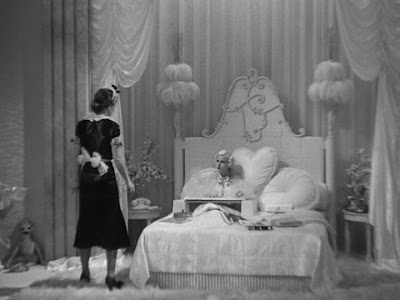 While the film is considered a romantic comedy, it was a telling tale of the times. Based on George Kaufman's hit Broadway play, it also dealt with suicide, financial ruin and alcoholism. Dinner at Eight received the Film Circle honor of being one of the best films of l934. 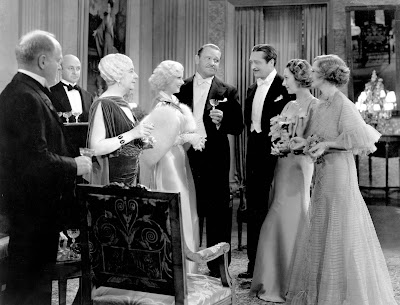 The Cast
The film was later remade into a "made for television" movie in l989 starring Marsha Mason, Harry Hamlin and Lauren Bacall. But like everything in life, nothing beats the original. 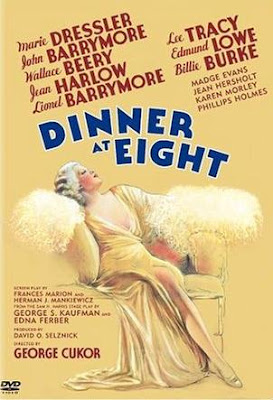 One of several designs for the movie poster and dvd 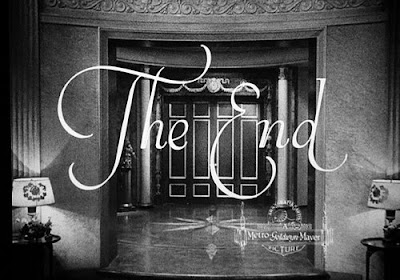