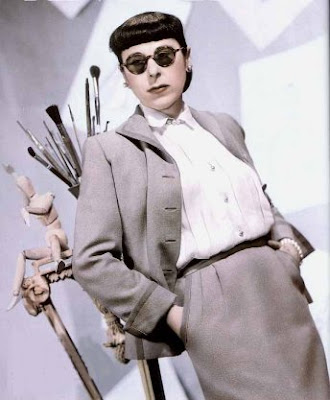 Long before Fashion Week, Project Runway and designers ordained as rock stars, there was Edith Head.

Head enjoyed a lustrous career  as a costume designer in Hollywood, designing wardrobes for over fifty years. She began her career as a sketch girl at Paramount in l924 (where she stayed for 44 years) and on to Universal Pictures where she remained until her death. At a time of male domination in Hollywood, she became the first design head. Nominated 35 times for the Academy Award and winning a record eight times, it's often said "Gowns by Edith Head" is one of the most noted screen credits in movie history (a record of 1100 films). She also is noted for one of my favorite Hollywood quotes, "I have yet to see one completely unspoiled star, except for Lassie." 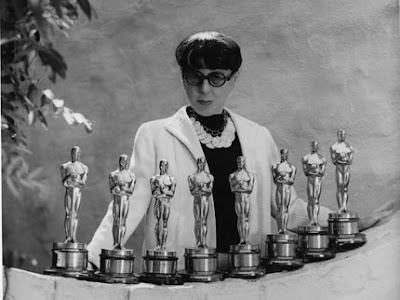 A favorite of A list stars Audrey Hepburn, Grace Kelly and Elizabeth Taylor, Head designed for films such as Sunset Boulevard, Vertigo, Marnie, All About Eve, A Place in the Sun, Roman Holiday, To Catch a Thief, Funny Face, Butch Cassidy and the Sundance Kid, Sabrina...and the list goes on. A favorite of Alfred Hitchcock, the director played an integral role on costume development. Head notes, "He has a complete phobia about what he calls 'eye-catchers,' like a scene with a woman in bright purple or a man in an orange suit. Unless there is a story reason for a color, we keep the colors muted because Hitchcock believes they an detract from an important action scene." 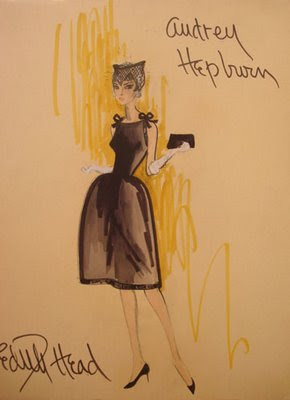 Her large blue lens glasses, Dutch boy haircut and tailored suits became her trademark (critics often wrote it disguised her age) and a look adapted for modern times by certain fashion editors. Head's later years found her writing books (The Dress Doctor and How to Dress for Success) and as a fashion commentator on The Art Linkletter Show. Her last film was the Steve Martin 1981 comedy Dead Men Don't Wear Plaid and Bette Davis gave the eulogy at her funeral.  All very fitting.


For more on her extraordinary career, I recommend the following books. Also check out the website Silver Screen Modiste for more on Hollywood costume designers.
Posted by Cathy Whitlock at 12:50 PM