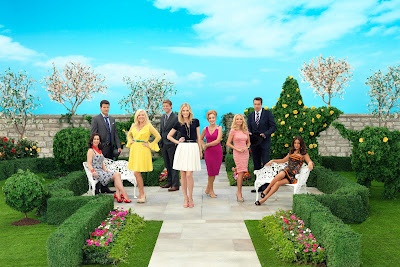 Botox, backstabbing, big Dallas design and the Bible are just a few of the things television viewers will soon associate with the letters GCB. Move over Southfork Ranch, Dallas is ready for yet another close-up.
Formerly (and controversially) known as Good Christian Bitches and Good Christian Belles, Sex and the City producer Darren Star’s wickedly bitchy comedy/drama GCB stars Leslie Bibb (Iron Man) as high school mean girl Amanda Vaughn who returns home as a recently divorced mother of two and finds her former high school friends have turned the tables of torment.  Based on Kim Gatlin’s best-selling book Good Christian Bitches (Brown Books, 2008), the show co-stars Kristen Chenowith as Amanda’s archrival and Annie Potts as her mother Gigi.
Set against the bigger than life worlds of the one percent elite of “The Big D,” production designer Denny Dugally and set decorator Bryan John Venegas (the pair created the Walker family interiors on ABC’s Brothers and Sisters) designed houses and offices for the five central characters – Amanda (who lives with her mother), a high powered real estate agent, a CEO, a homemaker, and an arch rival across the street. The adage of home as character certainly applies as the design duo used narrative design and set decoration to portray the personalities and motivation of each character.
The production team spent four days scouting historic and modern homes and soaking up local color in the tony Dallas enclaves of Highland Park, Preston Hollow, and University Park. “We visited homes, churches, country clubs, offices, stores, etc. and immersed ourselves in everything Dallas,” says Dugally. “While the pilot was shot entirely on location, Los Angeles doubles for Dallas in the series. “It was not an easy task as Dallas is known for it’s large expanses of property, many without high fences or security and lots of brick architecture. Los Angeles is full of palm trees that don’t do well in Dallas. We were able to find several wonderful and appropriate houses and a great church in the Los Angeles basin that serve as the exteriors for our show,” she says.
For the home of Amanda’s colorful mother, Dugally wanted the “interiors to remain very upscale but traditional.” Front and center is the ornate, winding staircase topped with a gold leafed dome. Asian accents, custom designed wallpapers by Astek in Los Angeles and white wainscoting are just a few of the design elements used for the warm gold, crimson and cream toned décor.
Kristen Chenowith’s Carlene gets a dramatically designed interior complete with a baby grand piano to practice hymns for Sundays in the church choir and a fireplace in almost every room. For the dark green and purple interiors, Dugally theorized Carlene “would have hired an interior designer from New York.  The result is a very highly styled interior with richly colored grass cloth, custom wallpapers, dark wood floors and pops of bright colors accenting against the dark elements in the room,” says Dugally.

For shrewd and decisive Cricket (Miriam Shor) who is CEO of her own company, “we chose to keep her designs modern, cold and calculated just like Cricket,” explains Dugally. The mid-century modern styled bedroom features a custom queen size bed with a classic Texas touch -- a headboard made of cowhide, black leather, and studs. And to further illustrate the narrative design, a framed set of shark’s jaws adorn the walls of her contemporary grey and blue office.
The heart of housewife Sharon’s (Jennifer Aspen) home is the kitchen and the designers opted for a French Country Style with a softer look to match her personality. In a setting that would make Martha Stewart pea green with envy, Dugally designed a kitchen with 3 double ovens, a huge range, a countertop deep fryer and a walk-in restaurant style refrigerator and pantry along with a white Carerra marble topped island – faux finished of course.
While Dallas certainly earns its bigger is better notoriety, Dugally steered away from the term “McMansions.” “The houses we saw in Dallas were real mansions, not McMansions, in their sheer scope and scale,” notes Dugally. “They weren’t out of scale for their neighborhood because every house in their neighborhood was huge! It was my task to create the look of a mansion on a smaller budget and reduced scale while maintaining the integrity of the houses in Dallas.”

One of the more pivotal and challenging sets was the design of the church that had to be big in both scale and demeanor. Dugally and Venegas visited a dozen churches for research and created a believable house of worship with 42 stained glass windows, an altar for the choir, and pew seating for 120. The church was painted and aged to make it look over forty years old. 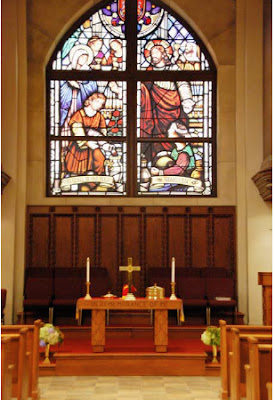 Expect to hear alot of "amens" and "bless her hearts" among the gilt and glamour in this alternate southern universe. GCB airs Sunday, March 4th at 10 pm eastern and 9 pm central. Note: This was a reprint of my article How to Fake 1% Opulence, Dallas Style in this week's Hollywood Reporter. And yes, that is CNN mogul/ex-husband of Jane Fonda/America's cup fame/buffalo raising Ted Turner on the cover. Is he making a comeback? 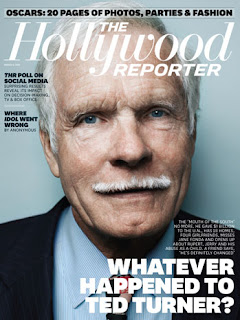